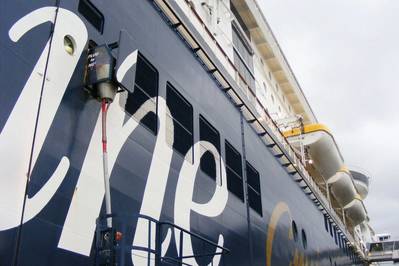 The construction of the first onshore power supply plant for commer-cial vessels at the Norwegenkai Terminal in the port of Kiel has begun.

As of spring 2019, it will be possible to supply big cruise ferries with all the electrical power they need during the time they are berthed in Kiel.

“We are taking action to make a substantial contribution to air purification”, said Economics Minister of the federal state of Schleswig-Holstein, Dr Bernd Buchholz. “The use of onshore power supply sustainably reduces ship emissions during time spent in port. We support this trend-setting project and beyond that advocate at government level to improve the overall economic condi-tions for the use of onshore power.”

The onshore power supply plant for the Norwegenkai is part of the BLUE PORT concept, in which further facilities of this kind are already being planned for Kiel.

Port Director Dr Dirk Claus said: “Upon completion of the Norwegenkai onshore power plant, the Schwedenkai Terminal and the Cruise Shipping Terminal Ostseekai will also be equipped with onshore power supply facilities by 2020. It is our intention to provide half of all ship calls in Kiel with onshore power in future. Doing so means that we are setting a new European standard.”

The overall project owner for the Norwegenkai facility, which is being built by Siemens AG, is the Port of Kiel. Total investment costs amount to 1.3 million Euros.

The Norwegenkai onshore power supply plant has a maximum power rating of 4.5 Megawatts (MW) at 10 Kilovolt (KV) and a network frequency of 50 Hertz (Hz).

Prior to power transfer from shore to ship taking place, the sys-tem checks the functionality of all plug and cable connections. Once completed, the onshore power connection is switched on. The ship synchronises itself with the onshore power plant which replaces the on-board power supply.