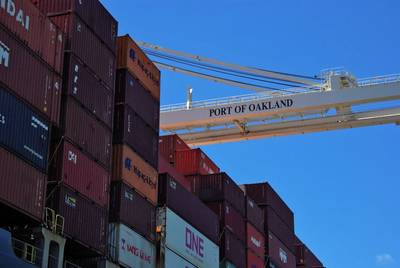 After two straight months of declining imports, the Port of Oakland reports its import volumes are on the rise, with containerized imports up 6.5% last month compared to November 2020 totals. For the first 11 months of 2021, Oakland imports are up nearly 8%, the port said.

The port attributed the recovery to additional vessel traffic, noting that 75 ships called in Oakland during November, the most in six months.

According to the port, shipping lines are restoring vessel service to Oakland following mid-year cancellations. The port said some cargo owners even chartered their own ships in November to reach Oakland. According to the port, carriers view Oakland as an uncongested alternative to gridlocked Southern California gateways. Ships bypassed Oakland earlier in the year due to excessive delays in Los Angeles and Long Beach.

The port said its total volume, including imports, exports and empty container repositioning, is up 1% this year. If activity levels hold, 2021 could be the busiest year in Oakland’s history, the port said.