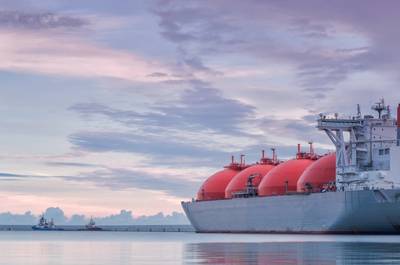 Portugal's Sines port is ready to start onward shipment of liquefied natural gas (LNG), which arrives in large tankers and will be transferred to smaller vessels to head to other European states, a government spokesman said on Tuesday.

He said a government feasibility study concluded that "with the existing infrastructure and simultaneous operations, Sines could transfer to central and northern Europe up to 10 billion cubic meters (353 billion cu ft) of LNG annually" within six to 12 months.

That amount, double Portugal's own natural gas consumption, could increase in the longer term if required, he added.

"Some countries have expressed interest in evaluating this possibility, and technical contacts are taking place," he said of the plans to ship LNG on to other European states, like Germany and Poland, although he did not elaborate about those contacts.

The European Union is looking for alternatives to replace Russian piped gas supplies, which covered about 40% of the bloc's needs last year.

Portugal hopes Sines, the closest deepwater European port to the U.S. coast, could be a European gateway for LNG from the United States and elsewhere, such as Nigeria or Trinidad and Tobago.

Sines could transfer the LNG to smaller ships suitable for supplying ports such as those in Germany and Poland, the spokesman said.

At this stage, only a modest investment of 12 million euros ($12.3 million) in equipment is planned. He said there were no plans for now to expand storage facilities but that could be evaluated "if there is robust demand with long-term prospects".

A second berth, costing an estimated 100 million euros, could be built in three years which would increase the capacity to receive and export LNG, as well as to inject more gas into the Iberian or wider European pipeline network.

The spokesman said also said Sines could be ready to export liquid hydrogen, a fuel that can be made from water using electrolysis powered by renewables, within 18 to 24 months.