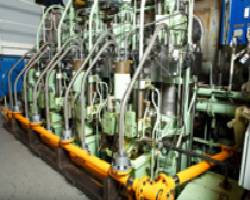 At a major event at its Diesel Research Centre in Copenhagen today, MAN Diesel & Turbo presented its ME-GI gas engine to a 300-strong invited audience of customers, licensees and journalists. The unveiling of the two-stroke engine represents the culmination of many years’ work that began in the 1990s with the company’s prototype MC-GI dual-fuel engine.

MAN Diesel & Turbo originally announced plans to carry out full-scale testing of the new engine in September 2010. Today’s successful, full-scale demonstration and performance verification test of the GI principle for all kinds of marine applications was carried out on MAN Diesel & Turbo’s 4T50ME-X R&D research engine, which has been rebuilt as a 4T50ME-GI engine operating on natural gas. Korea’s Daewoo Shipbuilding & Marine Engineering Co., Ltd. (DSME) has provided the ME-GI’s pertaining, high-pressure, cryogenic gas-supply system according to the terms of a development agreement signed in February 2010.

Market rationale
The ME-GI engine is a gas-injection, dual-fuel, low-speed diesel engine that, when acting as main propulsion in LNG carriers or any other type of merchant marine vessel, can burn gas or fuel-oil at any ratio, depending on the energy source available on board and dictated by relative cost and owner preference

Depending on relative price and availability, as well as environmental considerations, the ME-GI engine gives shipowners and operators the option of using either gas or HFO.

MAN Diesel & Turbo predicts a broad, potential market for its ME-GI engine, extending from LNG and LPG carriers to other oceangoing vessel segments such as containerships as well as ships plying a fixed trade. As such, the ME-GI engine represents a highly efficient, flexible, propulsion-plant solution.

Considered timing
“The unveiling of the ME-GI engine is MAN Diesel & Turbo’s response to current market conditions and the large audience in Copenhagen is proof of the great interest in this propulsion solution,” said MAN Diesel & Turbo’s Søren H. Jensen, Vice President and Head of Research & Development, Marine Low-Speed

He continued: “The ME-GI engine is the culmination of years of research and development and we consider the timing of its release to market to be optimal. We see many potential applications for the ME-GI’s increased flexibility and greater control both within the LNG sector and generally within marine transportation, as operators seek to control costs and emissions.”

Jensen concluded: “With the addition of the ME-GI engine to its existing portfolio, MAN Diesel & Turbo now offers the two-stroke market’s most comprehensive array of prime-mover solutions all the way up to 98-bore.”

Dual-fuel operation requires the injection of both pilot fuel-oil and gas fuel into the engine’s combustion chamber via different types of valves arranged in the cylinder head. The ME-GI engine head is fitted with two valves for gas injection and two for pilot fuel. The pilot-oil valve is a standard ME fuel-oil valve.

The ME-GI engine contains many inherent benefits, including: