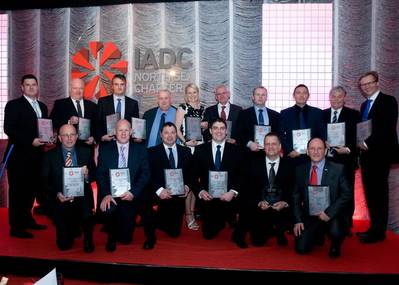 Julian Hall of Ensco, North Sea Chapter Chairman, said that it was important to recognize the contributions of individuals, teams and companies to the continuing safety of the industry.  “It has not been an easy year, with safety dominated by understandable concerns regarding helicpter reliability.  “Particular thanks should be given to Step Change in Safety’s Helicopter Safety Steering Group for their invaluable work and effort expended on industry’s behalf”.

IADC President and CEO Steve Colville in his address emphasised the importance of improving the competency of people, as well as the effectiveness of processes and efficiency of equipment.  “It is vital to drive down costs of operating in the North Sea”.  Mr Colville cited the tax raid on drilling contractors announced in the recent budget as demonstrating the conflict between the government's reasonable expectations for inward investment and higher safety expenditure and the wholly unreasonable actions of "putting up the rent" by increasing tax on contractors.

Awards were presented to companies and installations for their safety record over the last year.

This year, awards based on safety performance in 2013 went to Northern Offshore and Noble Drilling in the Jack-ups category; Transocean in the Semi-submersibles category; Archer in the Platforms and Stena Drilling in the Drillship category.

The Environmental Award went to Stena Drilling and the Associate Member Award was presented to Sodexo.

The Chairman’s Special Award, presented to someone who demonstrates strong safety leadership, went to Stuart Hepburn of Archer.

The recipient of the Val Hood Award, which was established last year in memory of a late colleague to recognize the contribution of a person or organization to the industry, was the Royal National Lifeboat Institution, a group reliant solely on charitable funding for their invaluable work.  A cheque for £15,000 was presented to Lin Wood representing RNLI.

The event was hosted by broadcaster and Deacon Blue drummer Dougie Vipond with entertainment from comedian Mike Gunn. Funds raised on the evening will be donated to CLIC Sargent and Macmillan Cancer Support.
The full list of winners was as follows: