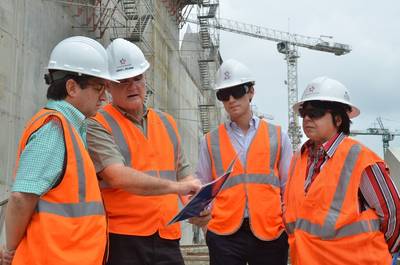 The new locks, situated on the Atlantic side, were visited by Moreno, accompanied by IDB delegates, who are in Panama to participate in the Fifty-Fourth Annual Meeting of the Board of Governors which takes place from March 14 to 17, 2013. During the visit, Panama Canal Administrator Jorge Luis Quijano presented an update on the progress of the Expansion Program.

The Panama Canal Administrator highlighted the importance of this visit since the IDB is one of the five multilateral institutions that are supporting the Expansion Program through partial funding.

The IDB, together with the Japan Bank for International Cooperation (JBIC), the European Investment Bank (EIB), the Corporación Andina de Fomento (CAF) and the International Finance Corporation (IFC), signed an agreement with the Panama Canal Authority in December 2008 for the financing of $2.3 billion for the waterway's expansion to cover a portion of the $5.25 billion total cost of the project.

The Panama Canal Expansion will double the waterway’s capacity through the construction of two new locks that will add a third lane, allowing the transit of more cargo and larger vessels.