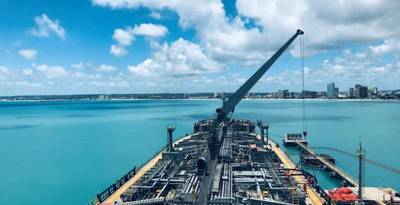 Product tanker freight rates softened in the third quarter of 2019 but rebounded strongly at the start of the fourth quarter following an increase in crude tanker rates that began after the attacks on Saudi Arabian oil facilities and accelerated dramatically to multi-year high levels at the end of September when the US imposed sanctions on two subsidiaries of China's COSCO Shipping.

Denmark-based TORM said that growth in global demand for oil products generally remained subdued in the first two months of the quarter but showed signs of increased momentum towards the end of the quarter.

The attacks on the Saudi Arabian crude oil facilities in September impacted refineries in the region, with several plants temporarily operating at reduced capacity. This supported refinery margins across all benchmark regions, while margins in the East reached two-year highs immediately after the attacks.

The strong reaction of the crude tanker freight rates was initiated by the attacks in Saudi Arabia, but more importantly affected by the sanctioning of COSCO vessels, which sent crude tanker rates to the highest levels seen since 2008. This encouraged several LR2 vessels to switch to dirty trades at the end of the quarter. This corresponded to a decline of around 5% in clean-trading LR2 capacity.

Looking at geographical differences, product tanker rates were generally stronger in the East than in the West. In the West, the closure of the Philadelphia Energy Solution (PES) refinery on the US East Coast at the end of June supported higher gasoline inflows to the US East Coast, with the country's gasoline imports going up 8% year on year in the third quarter.

Diesel flows from the US Gulf to South America remained at healthy levels on the back of an ailing refining sector in the latter region (e.g. Brazil). Nevertheless, subdued demand from West Africa, relatively low eastbound naphtha arbitrage departures as well as generally abundant vessel supply in the western hemisphere throughout most of the quarter resulted in rates softening compared to the second quarter.

In the East, the return of a number of export-oriented refineries from maintenance in the Middle East and India led to rate improvements in early August. The geopolitical risks in the Middle East were reinforced with attacks on Saudi Arabia's crude oil facilities in September that curtailed half of the country's crude production.

Although the effect was only temporary, and most of the affected capacity was brought online again by the end of September, Saudi Arabia cut runs at several refineries in order to meet its crude export contracts. This resulted in a decline in product exports, with naphtha flows to the Far East being affected. With lower crude tanker newbuilding deliveries in the third quarter, market cannibalization from the crude segment eased.