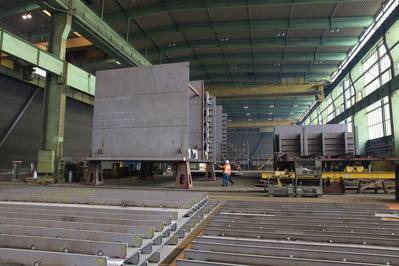 In the shipbuilding hall of the Sietas shipyard in Hamburg, a start has now been made on the construction of a German premiere. Production has started on the first sections and blocks of the offshore wind power jack-up vessel for the prestigious Dutch marine engineering company Van Oord.

In the presence of Peter de Ridder, COO of Van Oord, engineers from the specialist in complex offshore projects and the Sietas team, receiver Berthold Brinkmann and Rüdiger Fuchs, agent for the receiver, gave the go-ahead for the German premiere. Sietas is the first German shipyard to build such a special-purpose vessel. Delivery is scheduled for the spring of 2013. In addition, Van Oord has an option on a second vessel of the same type.

"We are delighted to be starting on the construction of this vessel. It is the first of a new generation for us," said Peter de Ridder, COO of Van Oord. "We are working very closely with the Sietas shipyard on this project, and we know that we will be getting a reliable, high-quality ship. The offshore market and the wind farms are getting more and more challenging. In the future, the foundations for more and more of these wind farms will be laid in water depths of up to 50 meters, instead of the current 30 meters. The turbines to drive the generators will in future require a power output of five to six megawatts, so they have become bigger and heavier. That is why we need this new type of vessel."

A team comprised of ten project managers, engineers and electricians from Van Oord will be at the Sietas shipyard throughout the entire construction period. Together with Van Oord, Sietas also developed the special-purpose vessel in 12 months. Operating as architect and integrator, the Sietas shipyard, in collaboration with its subsidiary Neuenfelder Maschinenfabrik (NMF), is providing the development and construction of the installation ship and the offshore crane from a single source.

Van Oord first placed the order in December, 2010, with the Sietas shipyard, which was only able to execute the order in the context of the insolvency proceedings with a new agreement. This new order was then placed in February, 2012.