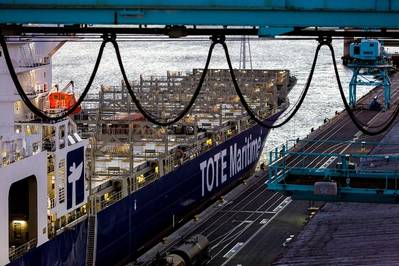 TOTE Maritime continues to see an increase in overall productivity at the Port of San Juan as more and more containers leave the terminal for communities around Puerto Rico.

Monday the terminal reached 87 percent productivity with more than 330 loads of relief and commercial goods leaving the terminal.
TOTE Maritime has been working closely with a number of partners including the Department of Homeland Security, American Red Cross, FEMA, the Puerto Rican government, the Government’s Elderly Support Team and customers to support their needs as they deliver goods to the island.
The TOTE Maritime team in San Juan has been working around the clock to ensure that drivers and customers coming to the terminal are able to access their goods. This includes working every day and weekend since the storm hit.
In addition, TOTE is handling the logistical needs for government purchased containers and relief goods being shipped from various non-profit organizations and other in the US. In doing so, TOTE is coordinating the inland transportation for relief goods – something that is not part of the company’s normal service offerings.
Late last night, TOTE Maritime’s Isla Bella arrived in San Juan for the third time since Hurricane Maria made landfall on September 19th. The Isla Bella docked with more than 1060 containers carrying relief and recovery goods for FEMA, utility trucks, communications infrastructure and other critical cargo.
On Saturday October 7, TOTE’s Perla del Caribe arrived with 1060 FEUs of cargo include relief goods, utility trucks, large generators and various equipment for communication and power companies.
TOTE Maritime has delivered more than 5,200 containers of goods to the island since Hurricane Maria and will deliver an additional 2000 containers in the coming week.