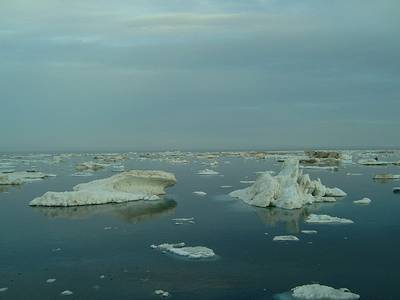 The Obama administration on Friday proposed standards on exploratory drilling for oil and gas in U.S. Arctic waters that would add costs for energy companies but aim to protect against catastrophic spills.
The rules, proposed by the Department of Interior, require for the first time that energy companies have access to equipment to contain potential well blowouts, such as rigs that can drill so-called relief wells. The companies would also need to ensure quick access to capping stacks and containment domes while drilling in the Chukchi and Beaufort seas off Alaska.
The costs of the rules would be about $1.2 billion over 10 years, the department estimated. The benefits of preventing or reducing the severity of an oil spill are difficult to quantify, it said.
The proposal comes in the wake of Royal Dutch Shell Plc's 2012 exploration season when the company lost control of the Kulluk drill rig, which drifted and ran aground in harsh, frigid waters. The rules, which could shorten drilling seasons, could also add costs to Statoil and ConocoPhillips which own leases in the Arctic. The companies are not currently drilling in the waters.
The rules are "designed to ensure safe energy exploration in unforgiving Arctic conditions," said Brian Salerno, head of the Bureau of Safety and Environmental Enforcement, an office of the Interior Department.
The Beaufort and Chukchi seas are a huge potential resource for the United States containing an estimated 21.5 billion barrels of oil and 93.4 trillion cubic feet of natural gas.
The public will have 60 days to comment on the rules which will not be finalized before this summer's drilling season.
A conservationist group applauded the plan. "It's a vast improvement to have Arctic-specific rules proposed so that companies will not be operating simply as they do in warmer, more developed Gulf of Mexico," said Marilyn Heiman, director of the Pew Charitable Trusts' U.S. Arctic project.
Shell said it would review the rules, but added that the company takes "unprecedented steps" to ensure safe operations in the Arctic and that "often, that has meant going above and beyond" requirements.
Senator Lisa Murkowski, an Alaska Republican and the head of her chamber's energy committee, said she would reserve judgment on the rules "until it's demonstrated that these regulations will not unnecessarily block investment."
The Obama administration last month proposed making small regions of Alaskan waters off limits to energy leasing to protect Native American hunting and fishing.
(Reporting by Timothy Gardner; Editing by Lisa Shumaker)