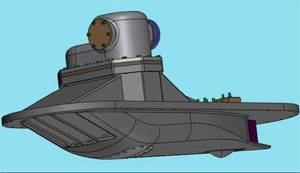 OCOR Corporation in San Diego, California has recently patented a submerged waterjet marine propulsion system that utilizes a helical lobe pump to displace water through a jet system. The ‘new twist’ refers to the helical geometry of the pump lobes on each of the counter-rotating rotors.

Called OCOR Marine Propulsion (OMP), the new system has the potential to dramatically reduce the fuel consumption of virtually any size vessel and do so without cavitation. The net result is a significant reduction in pollution to both marine life and the environment in addition to reducing the cost of vessel operation. The design was awarded one of eight Honorable Mentions out of a field of 1150 entries in the 2007 NASA Tech Briefs Magazine “Creating the Future” competition featured in the April 2008 issue.

Originally invented in 1975, the helical lobe pump has never been used in a marine propulsion application generally because of the large rotor size that would be required to match the flow rate of comparable axial flow devices such as a propeller, or in the case of water-jet, an impeller. However, use of the lobe pump for marine propulsion takes advantage of some unique characteristics of the continuous flow device that make it an ideal choice for the application. First of all, the flow through the system is virtually linear and in-line with the direction of vessel travel thereby eliminating the swirl losses of conventional axial flow rotors. Forward motion of the vessel creates suction head within the submerged inlet allowing the pump to run at more than twice the rotational speed compared to conventional, stationary applications. The pump is also a positive displacement device capable of producing high hydrostatic pressure within the water-jet housing ahead of the discharge. Lastly, reverse thrust with the OMP system is accomplished by simply reversing the rotation of the pump rotors causing water to be drawn into the discharge and expelled out the inlet compared to conventional water-jets that use an external bucket device to redirect the water flow.

The simplest configuration of the submerged OMP design features a cast housing that contains the dual rotor pump. The housing mounts within an opening in the underside of a watercraft hull as shown in the figure to the right. The lower, submerged portion of the housing contains the pump inlet and discharge openings. The forward end of the submerged housing is a structural grille that is approximately seventy percent open to allow water to enter the suction side of the pump. The grille also filters large objects from entering the pump and provides support for the lower bearing assembly. The upper part of the pump housing is within the vessel hull so that the power input shaft to the primary rotor can be attached to the motor.

The OMP unit shown in the figures has been sized to replace an outboard motor used to power a twenty foot water craft. At first sight, the submerged portion of the housing looks as though it would create extremely high fluid dynamic drag. In reality, the drag of the housing (measuring approximately five and a half inches high by fourteen and a half inches wide) is slightly less than that of a 150 hp outboard motor because the majority of the flow in the frontal region of the housing passes through the device much like the flow through a jet engine. Also the frontal wetted perimeter of the submerged housing is approximately 30% less than that of the aforementioned 150 hp outboard motor.

The submerged water-jet with a fixed area discharge will have its highest efficiency at a narrow range of engine RPM and corresponding pump speed that is matched to a volume flow and discharge area. This is because the hydrostatic discharge pressure, and hence thrust, is a function of the discharge water velocity squared which decreases rapidly with reduced flow. Nonetheless, an analysis of the fuel consumption between a twenty foot day cruiser powered by a 150 hp outboard and the same watercraft powered by an OCOR Marine Water-jet indicates a fuel saving of 41.7% at a vessel speed of 22.1 mph.

To overcome the limitation that the fixed discharge area system imposes on performance, OCOR Corporation has designed and patented a variable area discharge mechanism wherein flow from the pump is discharged longitudinally beneath the vessel through an opening that contains a movable center-body.

Translation of the center-body results in a change in the cross sectional area of the discharge opening thereby optimizing the water discharge velocity to any predetermined vessel speed, sort of like having an infinitely variable transmission on an automobile. A cross section of the OMP flow path with the center-body installed is shown below. A comparison of the actual performance parameters of a twenty foot day cruiser equipped with a 150 HP outboard motor and a numerical analysis of the OMP system for the same vessel indicates an average fuel saving of 33% over the speed range of zero to 39.6 miles per hour.

Another factor that could enhance the performance of the system and is yet to be included in the numerical analysis, is the effect of the shape of the trailing portion of the moveable center-body that lies aft of the discharge opening. This tapered body is a control surface that is acted upon by discharge water jet stream and generates additional thrust somewhat similar to the propulsion characteristic of the Aerospike rocket nozzle, a design that has been considered by aerospace engineers for more than four decades. For more information on the Aerospike see: http://en.wikipedia.org/wiki/Aerospike_engine

Although the data presented here is based on a relatively small pleasure boat hull, the design is applicable to any size vessel. Very large vessels, such as a cruise ship or an aircraft carrier, might benefit by the installation of multiple power units. For instance, two submerged power units near the bow and two units just forward of the stern would not only yield a significant fuel saving, but enhanced the vessels maneuverability. In addition to saving fuel and hence operating cost compared to conventional propeller and/or current water-jet systems, the OCOR Marine Propulsion system reduces the release of green house gases into the atmosphere in direct proportion to the fuel saved.