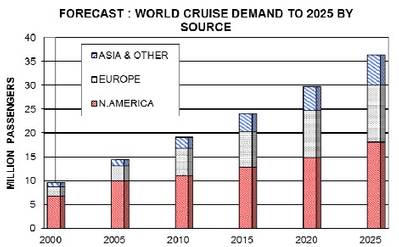 According to the latest publication from U.K.-based market consultants Ocean Shipping Consultants – “World Cruise Ports and Shipping” – the global cruise sector is forecast to exhibit dynamic growth in the period up to 2025, taking annual passenger demand up from around 20.9 million in 2012 to approximately 24m passengers by 2015, 29.7m by 2020 and 36.4m by 2025. This represents an overall forward expansion of 74%.

North America will still dominate the world cruise industry in terms of sourced passengers and cruise operators, but Europe and Asia Pacific are expected to grow strongly. This will have major implications for cruise capacity deployment, cruise ports development, cruise ship construction and cruise ship repair.

This Report is the 11th in-depth passenger shipping industry analysis published by OSC since 1992. The detail and range of the analysis and forecasts in the new Report are even greater than those in previous publications, and represent the most up to date and comprehensive set of analysis and forecasts available on international cruise shipping.

Below are some of the report’s key findings:

Cruise Fleet
• The distribution of the world cruise fleet is heavily skewed towards the lower end of the size spectrum in vessel numbers. Small category vessels with  less than 1,000 lower berths account for 51% in terms of vessel numbers, but only 14.4% in overall capacity.
• At the same time, large category vessels of more than 2,000 lower berths dominate in terms of passenger capacity, at 62%. The large category has also dominated recent years’ orderbooks, hence featuring strongly in cruise fleet’s development profile.
• The world cruise ship fleet is also dominated by Flag of Convenience (FOC) vessels – these total 238 existing vessels, approximating 64% of the world cruise aggregate. West European flags apply to 72 vessels (19% of the aggregate), followed by North America, Far East and others.

Cruise Ship Operators and World Cruise Shipping Patterns
• The industry is dominated by a relatively small number of lines, with the top 15 cruise lines representing almost 80% of total passenger capacity, and the top five lines (RCCL, Carnival Cruise, Princess, Costa, NCL) alone account for 49%.
• If controlled tonnage under different cruise lines is included, the distribution of capacity ownership displays a more marked concentration – the top three cruise line groups represent 73% of the total fleet capacity.
• The Caribbean constitutes by far the most significant cruise center in the world, with the Mediterranean the second largest. In recent years the Mediterranean market has increased significantly in importance in the global context.
• North Europe has witnessed one of the fastest growths in the cruise sector in most recent years, generated not only by interest from markets within Europe, but also from North American markets.
• The most robust growth since the mid-2000s was recorded in the Asia Pacific market, with total capacity increasing by more than six times over 2004-12, to an estimated 7.8m bed-days in 2012.

Cruise Ports and Economic Impact
• At the global level, North America still dominates the world cruise industry, with approximately 10.74 million passenger embarkations in 2012. Recent years have seen a reversal of the preceding decline, when economic downturn saw passenger numbers fall by 2.4% for 2008 and 1% for 2009.
• Total passenger numbers embarking from European ports reached 5.7 million in 2012, 2.5% growth from 2011, and double that of 2005.
• Florida is the center of cruising in the USA. The top three cruise ports in Florida are also the world’s top three: Miami, Port Everglades and Port Canaveral.
• The Caribbean is the world's most popular cruise destination, with the majority of ports in the region being destination ports or ports of call, as opposed to home ports. The Bahamas tops the list in terms of passenger arrivals.
• In Europe, the Mediterranean and North Europe are the most popular destination areas. Italy and Spain lead cruise passenger numbers in terms of both embarkation and destination. U.K. is the third largest country in respect of embarkation passengers. Greece, France and Norway are the locations for major destination ports.
• With recent strong growth in the region, ports in Asia have responded by undertaking a number of significant expansion projects. Singapore and Hong Kong remain the region’s main cruise centers, while China is expanding rapidly in cruise terminal activities, developing major home ports as well as ports-of-call.
• The economic impact of cruise activity on a port is significant, and the difference in this regard between a port of call and a home-port – even if actual passenger numbers handled are similar – can be large.
• Direct economic impact on an individual port is from three sources, namely cruise ship passenger expenditure, cruise ship crew expenditure, and cruise lines expenditure.
• Individual port authorities as well as local/regional/national governments have increasingly become aware of the massive potential economic benefit of increased cruise activity. Competition between ports/regions to attract more vessel calls, and ultimately home-port activity, is set to remain intense.

Cruise Ship Construction, Repair and Price
• European ship yards still remain the world center of cruise ship construction, although cruise shipbuilding has seen increased competition within a reduced marketplace in recent years, and the threat from outside Europe, in particular Asia, is strong and increasing.
• The largest part of world cruise ship repair work is handled by the large repair yards of the U.S., and of a number of West European countries. For major refits, a small number of specialist large European yards are prominent.
• Price changes over the mid-2000s were relatively small-scale until the wider shipbuilding boom saw average per berth prices rise dramatically from the $197,000 of 2006 to almost $350,000 in 2009.
• Since then, the newbuilding price has seen decline (as for other ship types), with average $/berth price levels approximating a little over $250,000 in 2012. The 2013 deliveries appear to follow the recent trend, with an average $/berth of $198,000 for three large vessels.

In over 200 pages, the highly detailed and extensive new report contains analysis of the cruise sector, and provides in-depth examination of likely future prospects for the industry in the period to 2025, from the aspects of cruise ship fleet, cruise passenger volumes, cruise lines, cruise ports, cruise vessel design and cruise itineraries.

The report includes detailed forecasts of developments for individual countries, regions and the world throughout the period to 2025. It is essential reading for all parties with an interest in the cruise sector.