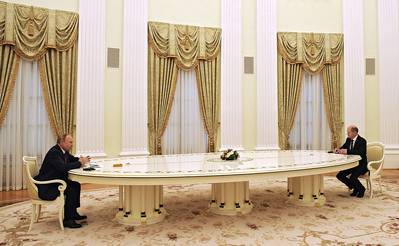 The President of Russia Vladimir Putin held talks with Chancellor of the Federal Republic of Germany Olaf Scholz in the Kremlin. ©Kremlin.ru

The $11-billion pipeline, which has faced stiff opposition from the United States and some European states, was built last September across the Baltic Sea from Russia to Germany, but has been idle pending German and EU regulatory clearance.

"This is one of Europe's largest infrastructure projects, aimed at significantly strengthening energy security on the continent," Putin said.

"I have said more than once that this project is purely commercial, and that there are no politics, nor any political tinge, here."

Some European politicians and experts have accused Russia of using its energy supplies as a political tool, and called for reducing reliance on commodity exports from Moscow.

Nord Stream 2 would double annual capacity of the existing Nord Stream pipeline via the Baltic Sea to 110 billion cubic meters of gas, more than half Russia's current pipeline gas exports to Europe.

Both projects are designed to bypass Ukraine, once a key route for Russia's gas exports to Europe, depriving Kyiv of billions of dollars in revenues from transit fees.

Putin reiterated that Russia was ready to continue gas transit via Ukraine after 2024 once the current deal is expired, but only if there is demand for gas in Europe and the route is economically viable.

He once again said that Russian gas is much cheaper under long-term deals with Gazprom than on the spot market.

Schroeder is also a board member at Russia's top oil producer Rosneft ROSN.MM and head of the shareholders’ committee of Nord Stream AG, the operating company of the existing pipeline.

"I believe this will be beneficial for our cooperation," Putin said.

Scholz said with regard to Nord Stream 2, he did not want to comment further on "the private commercial pursuits of a former chancellor".

"We are committed to ensuring gas transit in Europe works through Ukraine, Belarus, Poland and Nord Stream 1 according to the agreements we have," he said.

"And we also want to ensure peaceful development in Europe, that there will be no military confrontation in Ukraine. If that is the case, it will have far-reaching consequences."

Biden Drilling Plan May Exclude All Waters Beyond Gulf of Mexico

The U.S. Interior Department has recommended to the White House that all federal offshore oil and gas drilling auctions over…