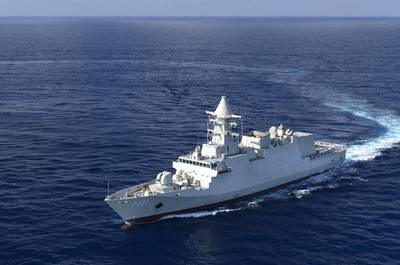 Qatar's Ministry of Defense has signed an agreement with Italian shipbuilding group Fincantieri evaluate and study new technologies and capabilities, possibly leading to a future acquisition of new vessels in 2020.

Fincantier said it signed a Memorandum of Understanding (MoU) with Barzan Holding, a company wholly owned by the Qatari Ministry of Defense and responsible for empowering the military capabilities of the national armed force in the state, in Doha, on Friday.

The programs indicated in the MOU include, among others, the design, construction and management of the naval base, whole warship fleet management, the application of new technologies such as digital radar and cybersecurity, as well as the supply of cutting-edge naval vessels and submarines, the shipbuilder said.

The signing between the CEO of Fincantieri, Giuseppe Bono, and the President of Barzan Holding, Nasser Al Naimi, on behalf of the Ministry of Defence of Qatar, took place in the presence of the Deputy Prime Minister and Minister of State for Defence Affairs, Khalid bin Mohamed Al Attiyah and high rank Officers of the Qatar Emiri Naval Forces.

The understanding improves the strategic relationship between Fincantieri and Qatari Armed Forces and falls within Fincantieri’s business development strategy in the Middle East. In fact, the company signed an almost 4 billion euros contract with the Qatari Ministry of Defense in June 2016 for the construction of seven surface vessels currently being built in the Group’s Italian shipyards. The contract included the construction of four corvettes of over 100 meters in length, one amphibious vessel and two patrol vessels, as well as support services in Qatar for an additional 10 years after delivery.

In the context of further strengthening its positioning in the Middle East, Fincantieri established Fincantieri Services Middle East in Doha, which will be the focal point for all the services and after sales activities on the naval vessels built by the Group for Qatar.