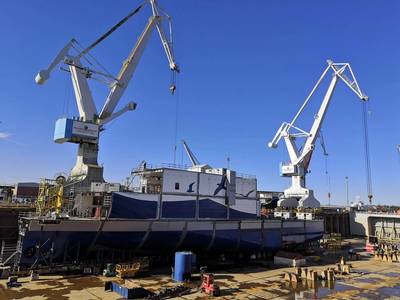 The company halted production last Friday after a cluster of coronavirus infections was discovered at the Rauma shipyard. Authorities tested all shipyard employees and quarantined those who had been exposed to the virus.

RMC said the yard was thoroughly cleaned and sanitized during the weeklong shutdown, and that production will recommence in phases, in a controlled manner. A few dozen employees who were not present during the outbreak will resume production on Thursday and Friday, and the next group of workers will return on Monday after the yard is closed for the weekend.

The shipyard currently has three ongoing projects, including ro-pax ferries Aurora Botnia and MyStar for Wasaline and Tallink respectively, as well as a series of four corvettes for the Finnish Defense Forces. RMC said it is reviewing the schedules for these projects as it continues to evaluate both its own and its network’s operating practices to ensure a safe return to full production.

Rauma Marine Constructions CEO, Jyrki Heinimaa, said, “Everyone has done their best and acted according to official guidelines. At this stage, however, it has evidently not been enough. We are therefore enforcing even stricter guidelines and monitoring them closely together with our network partners.”

Going forward, health screenings will be required prior to entering the shipyard. All work and breaks will be will be staggered, and movement around the yard will be permitted only in previously assigned, individual teams, RMC said, adding that the use of masks will be enforced and monitored more strictly.

“More attention will also be paid to the effectiveness of our communication, so that we can be sure that everyone working at the shipyard is aware of the guidelines and their significance also outside of official working hours. Compliance monitoring will be stepped up and RMC will require zero tolerance from all actors,” Heinimaa, said.

The company’s internal communication is multilingual, Heinimaa said, and RMC will assess whether an expanded range of languages will be needed to ensure instructions are fully comprehensible to everyone.

Heinimaa also addressed media reports that some its suppliers have been forging their employees’ coronavirus test certificates, stating that RMS is looking into the allegations. “We have no knowledge of such activities. However, this is a serious accusation, and we are thoroughly investigating it,” he said.