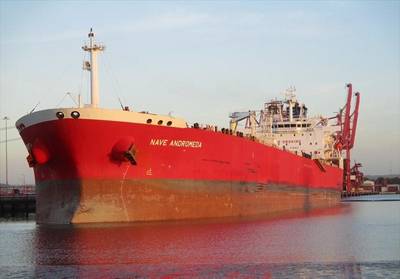 The suspected hijacking of the oil tanker Nave Andromeda off the coast of the Isle of Wight has captivated the press. While the heroic efforts of members of the Special Boat Service in resolving the situation have been highlighted, little public attention has been paid to the seafarers working onboard the tanker who were caught up in the incident.

At around 10 a.m. on October 25 the captain of the Nave Andromeda set off a security alert reporting that seven stowaways onboard had turned violent and were threatening the crew after the crew attempted to detain the stowaways in a cabin. The vessel was several miles off the coast of the Isle of Wight, and was scheduled to berth in Southampton.

The 22-person crew secured themselves in the citadel, a small room in the interior of the ship which is designated as a place in which to take shelter in the event of a security incident. It is understood that the crew remained sheltered in the citadel, a single room with no windows, for approximately 10 hours.

They were able to safely exit when U.K. special forces boarded the vessel and detained the stowaways. This must have been a very traumatic experience for all of the seafarers. They were effectively held hostage on their own vessel, a space in which they not only work but live for months at a time.

Almost immediately after their ordeal, the crew proceeded to berth the ship in Southampton in the early hours of October 26. The arrival in port will have required most of the crew to have been working—people who had spent the previous night at work and the following day being held hostage in a crowded room.

Even without such an incident, seafarers work long hours: my research indicates on average 10 hours each and every day that they are onboard. Stints onboard last an average of between three and six months. It is therefore hardly surprising that seafarers are known to experience substantial fatigue.

My own experience as a seafarer and my research into the industry tells me that seafarers such as those on the Nave Andromeda often have to continue working immediately following a traumatic event. Even after being held captive for a prolonged period of time seafarers would be expected to follow instructions to sail the ship to a safe port. It is hard to think of another occupation in which a worker could be held hostage and then immediately resume work without any sort of break or time to rest and recuperate.

While some companies have reported that they would try to replace traumatized crew members, this cannot be done until the vessel reaches port. If, for example, a fatal accident occurs in the middle of the ocean, this may be several weeks away. And even once a vessel has reached port following a traumatic event it is not unusual for seafarers to remain onboard the ship for the duration of their employment contract. For example, when the M/V Boularibank was attacked by pirates, the crew carried on working as usual.

I have myself experienced a traumatic incident onboard while working as crew on a product tanker. All I received following the incident was an email from the shipping company addressed to the crew asking anyone who required psychological support to contact them—otherwise it was business as usual. Perhaps a better approach would have been a confidential phone call from a trained individual with each crew member onboard, making it clear that it was OK to say that some support was needed.

Because although I was offered support from my employer, shore-based charities often have to step in because seafarers are reluctant to identify themselves to their employer as needing support. My research indicates that given the temporary nature of their employment, this reluctance to draw attention to themselves is due to the fear of being unable to secure future employment.

This situation is particularly concerning given that seafarers are known to experience relatively high rates of mental ill health, including depression and suicide ideation. It is possible that some of those on board may go on to experience post-traumatic stress disorder (PTSD), in a similar vein to those seafarers who have experienced piracy attacks.

It is also possible that some of the crew, particularly the captain, may be concerned that they will be blamed for the stowaways accessing the vessel. Research indicates that captains feel that they are considered to be responsible for any stowaways who manage to hide away on their vessel. Although security measures in ports tend to be very high in some parts of the world, in others, local measures are inadequate. From my own experience as a seafarer I know firsthand how difficult it can be for ships crews to prevent stowaways from boarding.

Clearly these 22 crew members have experienced a traumatic event. It should be remembered that they are all key workers. As an island nation 95% of all U.K. imports and exports come by sea. Without seafarers such as those working onboard the Nave Andromeda, the U.K. would come to a standstill. Whilst acknowledging the heroic efforts of members of the UK Special Forces it would be remiss not to also acknowledged the heroic efforts of the 22 seafarers working onboard.

The author
Helen Devereux is a researcher in seafarer health and safety at Solent University.