CNO Nominee, Navy Receives a "Shot Across the Bow" 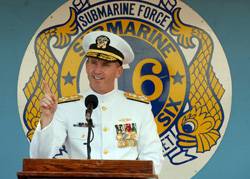 As CNO Admiral Gary Roughead sails toward his planned retirement in September, it appears his heir apparent as CNO, Adm. Jonathan Greenert, a 58-year-old submariner who nears confirmation, faces a number of hurdles in moving the Navy forward.
According to a report on www.signonsandiego.com, during confirmation hearings Adm. Greenert was warned by Senator John McCain that the Navy may fare thre worst during Pentagon spending cuts due to its over-budget, past due ship and plane programs.
As the next chief of the Navy nears confirmation, members of Congress are warning him that the Navy may fare the worst during Pentagon spending cuts because of its over-budget, past-due ship and plane programs.
Following are excerpts from Senator McCain's statement:
“Admiral Greenert, at a nomination hearing on Tuesday for General Martin Dempsey, nominated to be the next Chairman of the Joint Chiefs of Staff, we discussed the likelihood of deep cuts in future defense budgets and the uncertainty about how these cuts will affect defense personnel, equipment, readiness and capabilities.  General Dempsey expressed his appreciation for the role of seapower in our national defense strategy and the Navy’s enduring role in protecting our economic and national security interests in vast and vital areas, such as the Asia-Pacific.  Indeed, with the increasing importance of this geopolitical and maritime space, the roles and responsibilities of the Navy are becoming even more critical.
“General Dempsey also acknowledged, however, that if adequate funding is not provided by Congress, the Pentagon’s strategy will have to change to reflect the resources that are made available.  Clearly, each of the Services stands to be affected by the budget decisions made in the days ahead, but in my judgment the Navy, with its capital-intensive shipbuilding and aircraft procurement and maintenance accounts, could be the Service most adversely affected.
“This puts huge additional pressure on the Navy to design and produce, on time and on budget, reliable, battle-ready ships, submarines, and aircraft – a task in which, I am sad to say, the Navy’s recent track record has been less than admirable.  If the Navy’s performance in the design and procurement of its weapons systems does not improve, I am worried that the service could lose the commitment and support of American taxpayers and Congress, which would be a long-term disaster for the Navy and our nation.  While I am confident you will be confirmed, Admiral, you have many difficult challenges ahead.
“The Littoral Combat Ship (LCS) heads the list.  I continue to think the Navy misjudged in going forward with a dual-source, block-buy strategy for the LCS, and that the true lifecycle costs of buying and sustaining both LCS variants will be considerably more than what the Navy has estimated.  In recent days, we have learned that one of the newly-commissioned LCS ships has experienced unacceptable cracking of its steel hull, while the other variant suffers from ‘aggressive galvanic corrosion’ that will require repair and back-fitting to ensure the safety and durability of its aluminum hull.  I’m sure you share my frustration that following an $8 billion taxpayer investment in the LCS program, the Navy continues to lack a single ship that is operationally effective or reliable.
“Similarly with the Joint Strike Fighter program, we are all too familiar with its continued cost overruns and schedule slips.  After nearly ten years in development and a $56 billion investment to date, the program has produced a handful of test and operational aircraft.  We recently learned that the Government’s share of the most recent cost overruns for the first 28 production aircraft stands at three-quarters of a billion dollars, in addition to a requirement for an additional 33 months and $7.4 billion as a result of recent program restructuring decisions.  The overall estimated cost of the program at $383 billion and estimated sustainment cost of $1 trillion make it the most expensive acquisition program in history.  I remain deeply concerned about the affordability of this program, and I don’t think the taxpayer and the Congress will have a lot more tolerance for additional cost increases and schedule slips.  The same is true for the LPD-17 San Antonio class of amphibious ships.
“Plainly, the Department of the Navy faces many difficult challenges.  But if we can be confident in one thing without doubt, it is the performance and commitment of our Sailors, and that of their families, over the last 10 years of constant conflict.  They give us reason to redouble our efforts to solve these problems.  They make us proud every day.  And they deserve better.  So do the taxpayers."