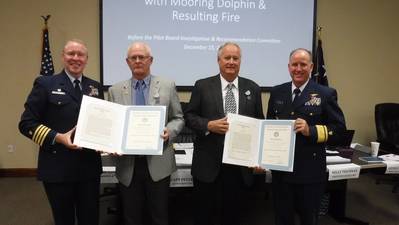 The USCG ceremony highlighted the fifth annual meeting of the Lone Star Harbor Safety Committee, announced Captain Robert M. Shearon, presiding officer -- Houston Pilots.
Captain McGee and Captain Phillips were dispatched September 6 to the M/T AFRAMAX RIVER at Houston Fuel Oil Berth 3. Due to its large size, this massive tanker required two pilots. Capt. McGee was conning the vessel and undocking when the ship experienced an engine failure and struck two mooring dolphins located just off of the end of ITC Berths 7/8 at about 0010 hours.
As a result of the contact, a port fuel tank ruptured causing a spill of diesel fuel that ignited and burned. The pilots maintained their stations in the wheelhouse surrounded by a towering wall of burning fuel. Both sides of the vessel were engulfed with flames which covered the bridge wings. The surrounding water was also on fire.
Captain McGee was able to maneuver the stricken vessel away from surrounding ships and hove to in the middle of the channel to prevent the flames from spreading to the numerous tank vessels moored on both sides of the channel. Simultaneously, Capt. Phillips handled communications with the Coast Guard and coordinated firefighting efforts with the tugs and fireboats via radio. The blaze continued for more than one hour. The tugs stayed with the vessel fighting the fire and helping maintain its position.
One pilot discovered that his face and hair were singed. The other pilot broke out and charged a firehose and extinguished a fire on the port bridge wing. With disaster seemingly imminent, Phillips turned to McGee and warned, "We are going to die." The blaze would continue for approximately 90 minutes.
There was property damage to the M/T AFRAMAX RIVER, and the resulting fire may have also caused property damage to the assisting harbor tugs. Once the fire was extinguished, Capt. McGee brought the vessel safety to the Cemex dock as directed by the Coast Guard.
Captain McGee has been a Houston Pilot for 18 years and Captain Phillips for 24 years. Houston Pilots are state licensed pilots appointed by the Governor to guide ships safely in and out of our port.
The ten members of the Houston Pilot Board of Investigations and Recommendations Commissioners listened to nearly two hours of testimony at its December 2016 hearing and unanimously voted to absolve McGee and Phillips of any blame and responsibility. Furthermore, the PBIRC highly praised the heroic actions of both Houston Pilots and recommended that the USCG strongly consider bestowing its highest honors to them for saving lives and preventing a disaster.
"Captains McGee and Phillips exemplify the calibre of dedicated mariners that make up the membership of the Houston Pilots," said Captain Robert M. Shearon, presiding officer of the Houston Pilots, "We are very proud of them. All Texans can take pride in our commitment to ensuring safety on the Houston Ship Channel."
The USCG Commandant also presented Meritorious Public Service Awards for bravery to other mariners who provided valuable help to the Houston Pilots in preventing disaster -- G&H Towing Captains Douglas Scott and William Curry, and Port of Houston Fire Boat Assistant Chief Glenn Hood and Senior Captain Kirk Beverung.