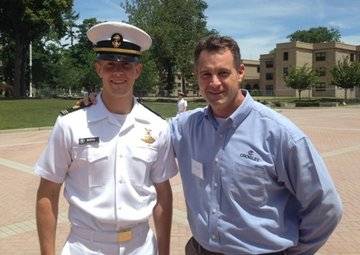 Crowley Maritime Corporation recently presented U.S. Merchant Marine Academy (USMMA) Midshipman Kevin Berto with the Maritime Security Enhancement Award during the Academy’s award convocation. Berto received the award, which was established by Crowley in 2003, in recognition of his strong interest in a port, maritime or transportation security career and high grade point average both in class and at sea as a cadet.

Crowley’s Bren Wade, manager, marine compliance, presented Berto with the award on behalf of Crowley, and said, “We are proud to present Crowley's Maritime Security Enhancement Award to such a deserving and dedicated student.”

Berto is a logistics and intermodal transportation major from Lake Forrest, Ill. He was one of two Regimental Commanders for the class of 2014, meaning he was the top-ranking midshipman officer and commander of the 700 member regiment of midshipmen, and will be accepting a commission in the U.S. Coast Guard.

In addition to the Crowley Maritime Enhancement Award, he also received the American Bureau of Shipping Award, the Cargocaire Award, the Admiral Land Medal, the Excellence in Cargo Operations Award, the VFW Award, the Captain Walter Alvey Memorial Award, the Transas USA Award, the SeaRiver Maritime Award, the Reserve Officers’ Association Award, the New York Commander Naval Order of the United States Award and the Regimental Commander’s Award during the event.

Since 1984, Crowley has provided more than $3 million dollars in scholarship funding for more than 1,000 students studying at maritime academies and other select institutions in the U.S., Puerto Rico and Central America. In 1994, Crowley Chairman and CEO, Tom Crowley Jr., established the Thomas B. Crowley Sr. Memorial Scholarship Program, in honor of his father, and has also donated more than $2 million to support other educational programs.