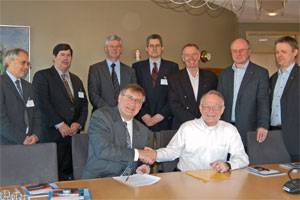 The maritime authority of Norway, the Norwegian Maritime Directorate (NMD), has extended its authorization to class society ABS to include Mobile Offshore Drilling Units (MODUs) in its scope as a Recognized Organization (RO).  This entitles ABS to class Norwegian-flagged rigs without having to perform additional safety equivalencies or a GAP analysis to meet Norwegian law.

The additional annex to the existing agreement between NMD and ABS was signed the week of Feb. 23 in Haugesund, Norway by ABS President and COO Christopher J. Wiernicki and NMD Acting Director General of Shipping and Navigation Sigurd Gude. It marked a milestone for the world’s leading offshore classification society as this acceptance by the NMD means ABS has demonstrated that its requirements for MODUs offer equivalent levels of safety to those currently used by the NMD.

This formal recognition is now reflected in ABS’ newly revised Guide for Mobile Offshore Units Operating on Norwegian Continental Shelf, N-Notation. The guide outlines the classification requirements for the (N) symbol, a design verification indicating the unit complies with applicable ABS Rules and or Guides plus compliance with the latest maritime technical requirements of Norway’s Petroleum Safety Authority (PSA) as enforced by NMD.

According to Oslo-based ABS Manager of Technology and Business Development Offshore for Norway Jon Strengehagen, the rapid expansion of the offshore industry in the North Sea and the growing number of new offshore units for Norwegian owners being built to ABS class, means this recognition comes at a time when service commitment is critical.

The authorization of ROs by the NMD is regulated by a general agreement between Norwegian Authorities and the ROs in a document revised in 2002.  The specific authorized duties are outlined in annexes to the agreement. ABS has, until now, been authorized to act as a RO for ships.  The new Annex has expanded the authorization to include mobile offshore units without having to reanalyze each unit to demonstrate equivalency.  As an RO, ABS is delegated authority to carry out design approval, inspections, initial surveys, annual surveys and five-yearly periodical surveys on behalf of the NMD to verify compliance with applicable NMD requirements and applicable Rules for the classification of mobile offshore units prescribed by the RO and accepted by the NMD.  The RO is further delegated to verify compliance with MARPOL annexes.

U.S. Coast Guard and Port of Virginia personnel are assisting the crew of a bulk carrier that ran aground near Norfolk, Va.

Oil is no longer leaking from the cracked hull of a containership moored in the Port of New Yok and New Jersey, the U.S.