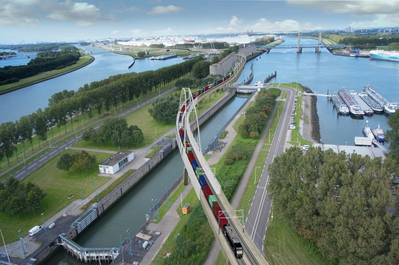 The Port of Rotterdam Authority is going to redirect approximately 4km of the port (or first) section of the Betuwe Route. As a result, the railway line will no longer run over the Caland Bridge, so that shipping and rail traffic will cease to get in each other’s way from 2020 onwards. It will also bring an end to the noise nuisance caused by the rail track near the village of Rozenburg.
Construction of the new route will cost around €275 million. The Ministry of Infrastructure and the Environment is contributing over €100 million, the European Union €62 million and the Port Authority the remainder. That is close on €100 million.
The Port Authority will construct the new route and then hand the railway line over to ProRail.
The Caland Bridge near Rozenburg is a steel vertical lift bridge that will reach the end of its technical lifespan in 2020. The bridge is an important traffic hub, used by rail and road traffic. By redirecting the railway line over the Rozenburgse Sluis and via Theemsweg, the increasing rail traffic to and from Europoort and the Maasvlakte will no longer be obstructed by shipping. This will considerably improve the flow of traffic.
COO of the Port of Rotterdam Authority, Ronald Paul, spoke on the investment in the Theemsweg Route: “The connections to the hinterland are essential for the port’s competitive position. That’s why we want to see a solution to the capacity problem. But because the Government doesn’t have sufficient funds to do this in the coming years, we suggested to the Ministry of Infrastructure and the Environment that we, as Port Authority, would pay a large proportion of the costs for the Theemsweg Route and execute the project ourselves. On completion, we will hand the new stretch of track over to ProRail. The ministry responded positively to our proposal. We will produce the final design for the railway line in collaboration with ProRail. The new route will be approximately 4km long and run over a raised railway viaduct. The track will have two arched bridges and link up again with the existing track where it meets the A15.”