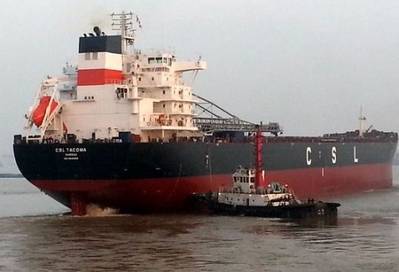 The final in a series of five Canada Steamship Lines' (CSL) state-of-the-art, new Trillium Class self-unloading Panamax vessels, the 228-meter long CSL Tacoma, embarked on her maiden voyage from the Chengxi Shipyard in Jiangyin, China on Oct. 12, and is making her maiden cargo voyage to San Francisco Bay. She is scheduled to arrive at the Port of Redwood City at noon on Wednesday, November 6, with sand and gravel construction materials from an Eagle Rock Aggregates quarry in British Columbia.

With the South Bay and Peninsula building boom resulting in skyrocketing demand for construction materials, imports of these materials by ship to the Port of Redwood City are expected to double to two million tons over the next 18 months, reports Port Executive Director Michael J. Giari. In fact, the Tacoma's maiden call will be one of three ships arriving at the Port of Redwood City this week with construction materials, with a combined total of 100,000 tons.

The Port will hold a "maiden voyage" welcome for the ship at Wharf 1 at the Port Wednesday at 2 p.m., with Port Chair Lorianna Kastrop and representatives from CSL, Cemex, and Eagle Rock Aggregates expected to be at the welcoming.

The materials are being brought into the Port by Cemex Aggregates which handles and distributes the aggregate materials to readi-mix plants throughout the South Bay. Millions of tons of construction material are needed in the South SF Bay for the new Apple headquarters, housing, hotels, entertainment complexes near the new Levi Stadium, office campuses for Google and other Silicon Valley companies, and more, including the residential construction boom in Redwood City. The logistics chain for this material consists of the Orca Quarry on northern Vancouver Island with a large modern, high speed ship loader; newly built state-of-the-art, self unloading CSL ships; the Port of Redwood City's new Wharf One facility that is scheduled to open in December; and new Cemex ready mix concrete plants at or near construction project sites in Silicon Valley. Private companies and the Port of Redwood City have invested millions of dollars in infrastructure, ships, and equipment to make the movement of this material as efficient as possible.

According to CSL Americas West Coast Director Garth Mitcham, the Tacoma "represents the latest in environmental technologies utilization and IMO Tier II propulsion among many other design achievements shared with her sister ships: Rt. Hon. Paul E. Martin, CSL Tecumseh, Balto and Balchen. Each of these vessels has performed their maiden voyages into the SF Bay area serving the State of California's infrastructure needs." The CSL Tecumseh is scheduled to call on the Port this Friday; the Rt. Hon. Paul E. Martin made its maiden cargo voyage to the Port of Redwood City in 2012.

According to Mitcham, CSL's Trillium Class vessels are currently the most advanced self-unloading ships in the world. Equipped to meet the evolving business needs and high environmental standards, CSL's next-generation vessels feature the latest engine technology and hull design to increase fuel efficiency and decrease air emissions, as well as state-of-the-art cargo handling systems to minimize dust and cargo residue.

CSL's new Panamax self-unloaders feature the latest dust-suppression technology, including:
•Dust collectors and bin vents
•Conveyor belt sprayers
•Covered discharge booms
•Capacity to pinpoint cargo placement
•Ability to minimize or even eliminate dust and spillage while discharging
•Capacity to operate in areas where traditional bulk carriers can't
•Reduced Environmental Footprint
•Loading and discharging cargo from a self-unloader can be carried out within a completely enclosed system. This ensures a clean ship and a clean dock, no dust pollution around the harbor and reduced noise levels.
•Advanced dust suppression equipment and fully enclosed or covered booms on many of our vessels further reduce the potential for dust or spillage.
•Noise generated by the ship's self unloading machinery is controlled through the use of acoustic enclosures and sound barriers.