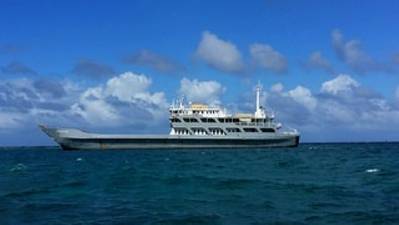 Coast Guard marine casualty investigators are investigating the cause of the recent grounding of the 'MV Commander' on Round Reef just outside Christiansted Harbor in the US Virgin Islands.

Initial underwater assessments have identified that the Commander’s two rudders are missing. Besides minor scratches there appears to be no major damage to the vessels’ hull. No sign of oil pollution leaking from the vessel or in the surrounding area has been identified and the vessel does not present a threat to the environment at this time.

“It is extremely fortunate that this vessel was promptly refloated after having grounded on Round Reef,” said Capt. Drew W. Pearson, Commander, U.S. Coast Guard Sector San Juan. “The aggressive response and close coordination between all agencies in the U.S. Virgin Island ensured safety of the public while averting an environmental tragedy in Christiansted Harbor.”

Following high tide and favorable weather conditions Saturday afternoon the vessel was able to refloat, free itself from the reef and safely anchor in the vicinity of Protestant Cay.