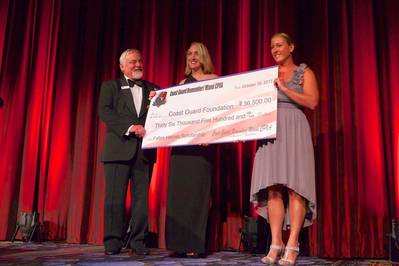 Love was awarded for dedicating countless hours of her personal time to make sure the Coast Guard Remember movement was a rousing success. The event raised more than $35,000 for the Coast Guard Foundation’s Fallen Heroes Fund, which provides college scholarships to children of Coast Guard members who die in the line of duty.

“The Coast Guard Remember is a promise to those who have sacrificed their lives in service of our country that we will never forget, and that we will take care of the loved ones they leave behind,” said Love. “We are honored to donate our proceeds to the Coast Guard Foundation. They have made a real difference in the lives of the men and women of the Coast Guard and their families over the last 40 years; it is a privilege to support them.”

The Coast Guard Remember movement began three years ago as one individual’s project, and has since grown into a worldwide event with thousands of people participating in events from California to Bahrain. For the organization’s commitment to helping those who have lost loved ones in the line of duty, the Coast Guard Foundation presented Love with the Beacon Award during its national awards dinner, where other feats of heroism and professional in the Coast Guard were recognized.

"Lucy’s work with the Coast Guard Remember movement is emblematic of the type of people serving in the U.S. Coast Guard," said Senior Vice President of Development Brad Sisley. "This movement has grown exponentially since they stepped up and we hope it will continue to grow going forward. Thanks to their commitment and generous donations, we have been able to make a difference in lives of the children of fallen heroes."

For more than 40 years, the Coast Guard Foundation has been inspiring leadership, learning and a proud legacy of service. So far in 2013, the Foundation has raised $550,000 for college scholarships for the children of enlisted personnel, which is more than double the amount raised the previous year. The Foundation is also building a $350,000 community center in Sault Ste. Marie, Michigan – a project that will provide Coast Guard families a safe place to build a community. These are just two small examples of the ways the Foundation supports the men and women who wear the Coast Guard uniform.