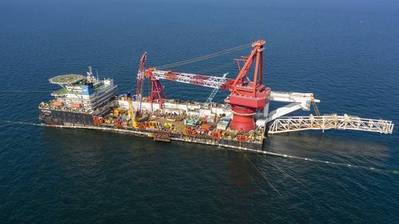 A German regulator's decision to suspend licensing of the Nord Stream 2 pipeline could delay commissioning of the infrastructure to March 2022, government sources told Reuters.

"I expect that the start of Nord Stream 2 could be delayed until March 2022," a government source said on Wednesday.

The source cited the need for Russia's Gazprom to create a limited liability company under German law, adding that Gazprom had flagged it would start doing so.

Tuesday's move https://www.reuters.com/business/energy/german-energy-regulator-suspends-nord-stream-2-certification-makes-demands-2021-11-16 has sparked gas price surges as policymakers in capitals across the European continent and the United States evaluate its implications.

The Swiss-based Nord Stream 2 consortium must form a subsidiary under German law to show it has enough funding and independence of the Russian parent company before the certification period starts counting again, ahead of European Commission scrutiny.

The sources said that Germany had insisted that Gazprom respect legal rules and warned against illicit gas sales.

Market sources are concerned about Gazprom's ability to deliver to export markets, which are jittery amid low stocks as winter approaches.

"But there is free transit capacities via Belarus and Ukraine, so more gas could flow here than is currently the case," he added.

U.S. Officials: Nord Stream 2 Pipeline to be Shut Down if Russia Invades Ukraine

U.S. officials have told members of Congress they have an understanding with Germany about shutting down the Nord Stream…