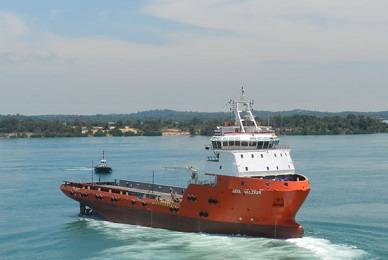 The group’s total revenue for the financial year under review was $201.8 million, 145% higher than the previous financial year. The increase in the group’s revenue was due to increased vessel sales and improved charter utilization. The Offshore Support Services (OSS) Division’s higher revenue for the financial year under review was due to improved utilization of 80% compared to 70% a year ago. Also, higher day rates have flowed from the expansion of our geographical presence beyond Asia to West Africa, India and the Middle East and Jaya’s vessels taking on more complex works in these markets.

Offshore Engineering Services (OES) Division’s revenue has also increased as the OES Division delivered and sold three vessels, including a state of the art ice class 16,000 bhp anchor handling tug and supply vessel, compared to one vessel sold in FY2012.
The group’s net profit for the financial year under review was $46.1 million, compared to $43.8 million in the previous financial year. The increase in net profit was mainly attributable to improved charter utilization as well as higher average daily charter revenue of $13,624/day vs. $10,485/day in the previous financial year. As at June 30, 2013, the equity attributable to equity holders was $540.4 million compared to $498.2 million as at June 30, 2012. The group is in a net cash position with cash and cash equivalents of $173.3 million and gross debt of $114.4 million.

Venkatraman Sheshashayee, Chief Executive Officer and Executive Director of Jaya said, “Fourth quarter utilization rebounded strongly to a record 91%, Jaya’s highest ever. We are pleased that our redoubled efforts to put our vessels to work on term charters have paid off, with many of the new charters on higher rates.”

Industry fundamentals remain solid, with demand for energy, and thus for oil and gas, continuing to rise, especially in emerging markets. Buoyant demand and stable oil prices are conducive to rising levels of exploration and production activity, which drive demand for offshore vessels.

In June 2013, the group announced it had secured charter contracts of more than $60 million for three of its new platform supply vessels. The charters of two of these vessels mark Jaya’s entrance into the booming Latin American market and are in line with the group’s market growth and geographical diversification strategies. In the same month, the group also announced it had signed an agreement to sell a new state-of-the-art anchor handling tug supply vessel, Jaya Sovereign, to Canadian buyers, Atlantic Towing Limited. The vessel’s delivery is expected by the end of 2013. The group has also secured a charter contract for a period of up to three years for its multipurpose maintenance and accommodation vessel, Jaya Privilege, which is under construction.

The group has a strong charter order book of $255 million (up from $195 million a year ago) which provides it with a recurring stream of revenue. Commenting on the results, Mr. Sheshashayee said, “Jaya is continuing to drive the new strategic roadmap that the group put in place in 2012. We are continuing to invest in our people and processes and in strengthening our internal efficiencies.

Our planned expansion into new markets, with Jaya’s first state-of-the-art deep-water PSV Jaya Valour commencing a long term charter immediately on delivery, and MPMAV Jaya Privilege being awarded a long term charter in Latin America, are clearly bearing fruit. We are listening to and working with the market; as a result, we are modifying and enhancing our new builds and moving them further ahead the technology curve. This is exciting substantial interest from the market. We believe Jaya is well positioned to continue our expansion into new segments and new markets with more sophisticated vessels serving the increasingly complex demands of our customers. We are confident that by continuing to focus on our service delivery and fulfilling our customers’ needs, we will go from strength to strength.”