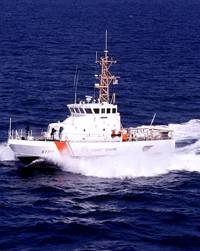 A man and woman wearing lifejackets were aboard a 19-foot vessel with their dogs when they began taking on water.

The crew of the Coast Guard Cutter Wahoo, an 87-foot patrol boat homeported in Port Angeles was already underway in the area and a boatcrew from Coast Guard Station Port Angeles launched aboard a 45-foot Response Boat-Medium.

“Without the Coast Guard there they would have sank and been in the water with two dogs, so having their life jackets on was an important safety measure,” said Petty Officer 2nd Class Jeremy Higgins, coxswain of the RBM. “Having the Wahoo’s crew there and getting the passenger and dogs off allowed us to pass them a pump so they could safely dewater the vessel and make it back to shore.”

Watchstanders at Coast Guard Sector Puget Sound, in Seattle, were notified at 8:42 a.m. by 911 dispatchers after the woman aboard the vessel called 911 on a cell phone to report the vessel taking on water.

An inmate has died after jumping overboard from a New York City jail barge, the city Department of Correction announced.Police…