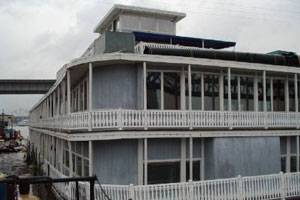 On December 19, 2008, the iconic Lt. Robert E. Lee riverboat will be sold to the highest bidder - regardless of price - at an unreserved public auction in St. Louis, Missouri. Built in 1969, the 19th-century replica riverboat served for decades as a popular restaurant and nightspot on the Mississippi River; it was extensively renovated in 2000-01. Ritchie Bros. Auctioneers will sell the riverboat along with a large selection of heavy equipment and trucks at its upcoming unreserved public auction in St. Louis.

"Most locals and many tourists have enjoyed dining and dancing to live Dixieland music on the Lt. Robert E. Lee - including me; it's a local icon," said Nick Pacino, Ritchie Bros. Territory Manager. "Our upcoming unreserved auction represents a once-in-a-lifetime opportunity for wise investors. This unique riverboat has a fascinating history and enormous potential - and it will be sold to the highest bidder on December 19, with no minimum bids or reserve prices."

The Lt. Robert E. Lee riverboat is 213 feet long, 54 feet wide and 72 feet high from the waterline to the top of the smoke stacks. It is approximately 17,000 square feet, with four outdoor decks, multiple bars and dining areas (with room for 500 diners), a saloon with a stage, and several commercial kitchens. It is currently located about 1/4 mile south of the Gateway Arch on the St. Louis riverfront.

"The Lt. Robert E. Lee is a rare find; it is authentic, classy, memorable," said Bill Manley, one of the riverboat's four owners. "We have invested a lot in the boat to make it structurally sound and return it to its former glory. We're sorry to be selling but look forward to seeing the riverboat up and running again. Although it is ideal for a floating restaurant or special events, it could also be used as a hotel, crew quarters or sales office for a marina; its potential is unlimited. It would be great to see it remain in St. Louis but it would work well anywhere along the river system."

To arrange an inspection of the Lt. Robert E. Lee contact Nick Pacino, Ritchie Bros. Territory Manager, at +1.314.809.8861. The riverboat will be sold with no minimum bids or reserves at an unreserved Ritchie Bros. auction in St. Louis on December 19.