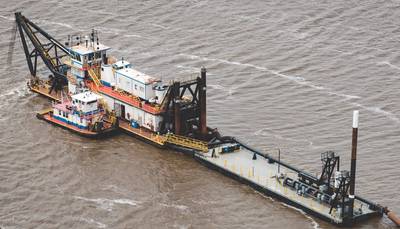 Vickie Watson, operations project manager for the Memphis District, said the contract is for the rental of a fully operated hydraulic cutterhead dredge and attendant dredge plant, including discharge pipeline. Bid items include rental by the hour, towing upstream and downstream by mile, and mobilization and demobilization.

“Every harbor was affected by the high water, but because we have dredged every year over the last four years, it was easy to remove the sediment that was placed,” Watson noted. “We didn’t have any flood-related damages in our harbors, and that’s because of the maintenance work we do every year.”

Inland Dredging used the dredge Integrity, a 24-inch cutterhead dredge, along with two tugboats, several barges, new pipeline and a supply boat. Tim Dyer, project manager at Inland Dredging, said the they made modifications to the dredge in order to perform the work. Inland Dredging built an idler, or extension barge, that allowed the dredge to swing wider channels. The dredge is also outfitted with a sliding spud to propel the dredge forward, instead of swinging side to side. The retrofitting of the vessel was performed at Inland Dredging’s Mt. Vernon, Ala. ship and repair yard.

“These harbors serve as vital links to rail and highway transportation systems in the region, helping to deliver products and commodities to and from global markets,” Army Corps’ Watson explained. “Without regular maintenance dredging, barges eventually couldn’t make their way up and down the river and in and out of the harbors as needed – this is why we dredge and why it is so important to do so.”

U.S. dredging companies do it all. Dredging Contractors of America dredgers make sure America’s inland river system is dredged and cleared, ensuring the movement of commerce. American dredging companies are always reinvesting in new equipment with capital investment and securing of fixed assets. Inland Dredging Company is another shining example of America’s dredging industry at its best.