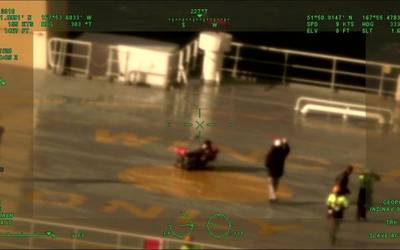 At 1:32 p.m. Wednesday, Coast Guard watchstanders received a medevac request for a 48 year-old crewmember reportedly experiencing symptoms of appendicitis aboard the 653-foot, Marshall Islands flagged roll-on, roll-off vehicle carrier. The Duty Flight Surgeon was consulted and a medevac was recommended.

Initially 530 miles south of Unalaska Island, Morning Peace proceeded toward Dutch Harbor throughout the night to close the distance. A Coast Guard aircrew launched from Cordova at 8:30 p.m. and arrived in Dutch Harbor at 7:21 a.m. Thursday morning after refueling in Cold Bay.

By 11:02 a.m. the Coast Guard helicopter aircrew hoisted the man and transferred him to awaiting commercial medevac services in Dutch Harbor for further transport to Anchorage. On-scene weather was an air temperature of 48 degrees, 31-mph winds and 5-mile visibility.

“Cooperation between Morning Peace and Coast Guard crews made this possible,” said Petty Officer 1st Class Dustin Lake, District 17 operations unit watchstander. “The Morning Peace traveled more than 400 miles to make this medevac possible and updated us on the patient’s condition every four hours. Thanks go out to them for getting their crewmember within range of our helicopter so we could get him the medical care he needed."