Ørsted Orders CTV Pair in the US 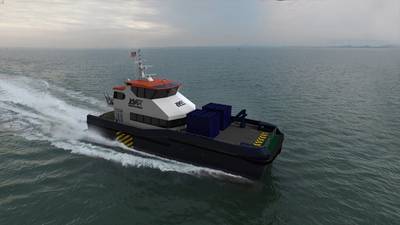 The first CTV will be built by US Workboats in Hubert, North Carolina and used for Orsted’s Coastal Virginia offshore wind farm, followed by subsequent service on northeast projects.

CTVs are the workboats that carry workers to and from offshore wind towers for construction, maintenance and operations, and the newbuilds will be the second and third of their type in America.

The first boat is already under construction at U.S. Workboats and will be delivered next year.

Both WindServe and Senesco are owned by Reinauer Transportation, which has been involved in the U.S. East Coast maritime industry for nearly 100 years.

The CTVs will high-speed aluminum catamarans built to a custom design from U.K. based BMT Group, and will be built specifically for U.S. East Coast sea conditions. BMT has extensive offshore wind experience and a large portfolio of offshore wind vessels, with 49 CTVs currently operating in Europe.

The vessels will be classed with DNV GL and will be the first offshore wind vessels built in the United States to class requirements.