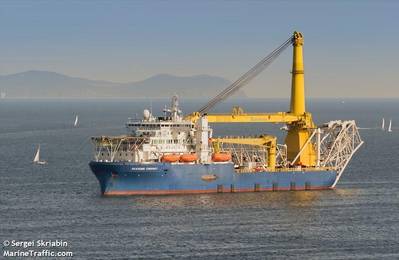 The consortium led by Gazprom building the 1,230 kilometers (km) pipeline said last month that work would resume after it was suspended a year ago when U.S. sanctions targeted companies involved in the construction.

The U.S. ambassador to Berlin called on the German government and the European Union to put a temporary halt to construction work on the pipeline to send a signal to Moscow.

Washington says the pipeline, which has become a flashpoint in relations between Russia and the West that have sunk to post-Cold War lows, compromises European energy security.

"This pipeline is not just an economic project, but the Kremlin's political tool to bypass Ukraine and divide Europe," Robin Quinville, acting U.S. ambassador to Berlin, told Germany's Handelsblatt daily.

The maritime authority in the German city of Stralsund has informed shippers there will be pipeline-laying activities from Dec. 5 through Dec. 31 in the Baltic Sea area where Nord Stream 2 will make landfall.

It did not say when the work would be finished or how the other remaining sections of the pipeline would be laid, adding that it will name the vessel, which would lay pipes, later. It declined to comment further on Friday.