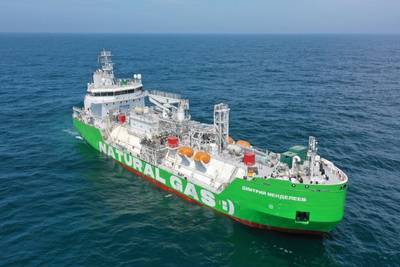 The Dmitry Mendeleev is expected to enter Gazprom Neft’s fleet in the second half of this year, the company said.

“The next stage will be the testing of systems for loading, storing and discharging of LNG,” it said.

The Dmitry Mendeleev is an Arc4 ice-class vessel which will be able to transport up to 5,800 cubic meters of LNG. It will operate in ports on the Gulf of Finland and the Baltic Sea, including St. Petersburg, Ust-Luga and Primorsk.

The shipping sector is under pressure to reduce carbon emissions and last year adopted stricter rules on sulphur content in marine fuel.

Operators are also looking to LNG to fuel tankers and cruise liners.

LNG emits 21% less CO2 than fuel oil and substantially less particulate matter, according to a report by Deloitte on shipping fuel published in 2019.