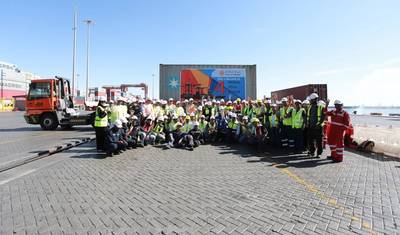 Port of Salalah, the largest port in Oman, hit an all-time record container volume of 4-million TEUs in December 2019.

Considering all services and volumes that were re-directed to other ports due to the impact of Cyclone Mekunu in 2018, the Port of Salalah has also achieved a 19% year-on-year volume growth, said a press note from the port, which is situated in the Dhofar Governorate, on the Arabian Sea which is on the northern part of the Indian Ocean.

The concerted efforts of employees and the support of stakeholders have been reinforced by significant incremental capital expenditure as part of the company’s asset replacement and capacity augmentation program.

“We are proud of the achievement of the team,” says Mark Hardiman, CEO of Port of Salalah. “Our success is testament to the confidence and continued support that the the Port receives from the Government of Oman and its customers, and to the Port’s employees whose commitment has been critical in reaching this important milestone.”

During 2019, the port secured a number of strategic customers and increased its product offering. This will not only contribute to continued volume growth but also to the diversity of cargo handled by the port. Securing these customers will make a significant contribution to ongoing efforts to support economic diversification and increase economic value for Oman.

The port also achieved numerous milestones in productivity this year and as part of its digital transformation, has successfully deployed N4, a state-of-the-art Terminal Operating System (TOS).