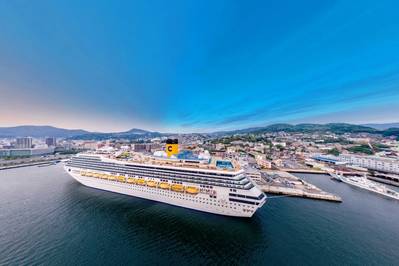 The total investment made by the Western Ligurian Sea Port Authority to renovate the quay, and by Costa Cruises on the terminal, amounts to around 22 million euros.

The work was completed within the expected timescale and has adapted the main cruise ship quay to the requirements of the latest generation of ships.

Costa Cruise has therefore regained access to its historic quay, where millions of passengers have regularly disembarked over the last fifteen years or so, making the Savona hub one of the busiest cruise ports in Italy and Europe.

Allowing the quay to accommodate the most recently built ships required the sea bed to be deepened from the initial -9 meters to -11, which involved reinforcing quays 9 and 10 and the installation of scaffolding supported by pillars on the front of quay 8.

The investment of 17 million euros made by the Western Ligurian Sea Port Authority  fully respected the project timetable for the arrival of the Costa Diadema.

Paolo Emilio Signorini, president of the Western Ligurian Sea Port Authority, said: “Supporting the cruise sector is a priority for the Port Authority. This priority is shared with Costa Cruises, which made the considerable investments needed to adapt its home port's passenger facilities as a further successful step forward in the fruitful relationship it has always had with the authority.”

Signorini continued: “Savona and Genoa are in the top 10 Italian ports with a positive trend for the current year and excellent forecasts for 2020 that reinforce this trend, making Liguria the top Italian region in terms of the number of cruise travelers received. The efforts made by the Port Authority and Costa Cruises are an important confirmation, coming at the end of a difficult year which has seen all the institutions involved in a relaunch following the collapse of the Morandi Bridge in Genoa.”

Costa Cruises has invested a total of almost 5 million euros in the adaptation work on the Palacrociere terminal 1.  Following a competitive tender process, the work carried out within the facility was entrusted to six companies from the Savona area.

The work on the quay and the Palacrociere terminal 1 was carried out ahead of the arrival of Costa Smeralda, the new flagship that will be calling at Savona every Saturday from December 21, 2019.