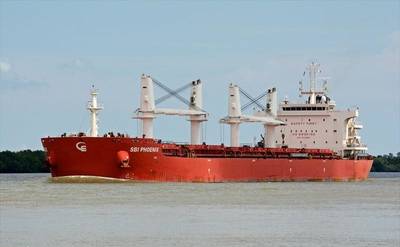 Scorpio Bulkers, Inc. announced Wednesday that it has entered into agreements with an unaffiliated third party to sell two 2017-built Ultramax bulk carriers for approximately $34 million as the dry bulk shipping company continues its transition to offshore wind services.

The ships, SBI Phoenix and SBI Samson, are expected to be handed over to the unnamed buyer in the fourth quarter, Scorpio said. Both vessels were built at China's Chengxi Shipyard.

The bulk carriers are the fourth and fifth Scorpio has sold since its August announcement revealing plans to enter into a shipbuilding contract with South Korea's Daewoo Shipbuilding and Marine Engineering (DSME) to build a wind turbine installation vessel for delivery in 2023, with options to build three further similar vessels. The Monaco-headquartered shipowner aims to transition fully from dry bulk shipping to the offshore wind industry, joining a growing number of maritime and offshore oil and gas companies targeting opportunities in renewables.

Since September 28, Scorpio has sold three Kamsarmax vessels—2015-built SBI Conga for $18.4 million and 2016-built SBI Sousta and SBI Rock for $18.5 million and $18 million respectively—each to unnamed third parties for delivery in the fourth quarter.

Upon completing the vessel sales, Scorpio Bulkers will have an operating fleet of 47 vessels, consisting of 44 wholly-owned or finance leased dry bulk vessels (including 13 Kamsarmax vessels and 31 Ultramax vessels) and five time chartered-in Kamsarmax vessels, the company said. Scorpio has said it will not order any new bulk carriers going forward.

"Last month we announced a new direction for Scorpio Bulkers: offshore wind as a sustainable business opportunity," said Scorpio's Chairman and CEO Emanuele Lauro when announcing the first Kasamax sale in September. "This sale represents a step, one of the many deliberate steps we must take, in our transition."