Scorpio Continues to Sell Bulkers in Transition to Offshore Wind 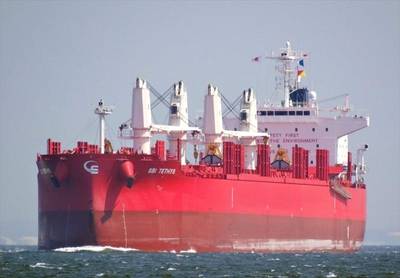 Scorpio Bulkers has sold off another vessel as the NYSE-listed shipowner shifts its focus to the offshore wind market.

SBI Tethys was sold for $18.25 million and is expected to be handed over to its new owner in the first quarter of 2021, Scorpio announced Tuesday. The 2016-built Ultramax is the latest in a string of bulk carriers sold by Scorpio since the company announced in August that it planned to depart the dry bulk shipping business.

The company has recently sold eight vessels and has contracted to sell 13 additional vessels, all of which are expected to close in the first half of 2021. Upon the completion of the announced vessel sales, Scorpio Bulkers will have an operating fleet of 33 vessels consisting of 28 wholly-owned or finance leased drybulk vessels (including eight Kamsarmax vessels and 20 Ultramax vessels), and five time chartered-in Kamsarmax vessels.

Eyeing an exit from dry bulk and new opportunities in the offshore wind sector, Scorpio Bulkers announced in August that it had signed a letter of intent to enter into a shipbuilding contract with South Korea's Daewoo Shipbuilding and Marine Engineering (DSME) to build a wind turbine installation vessel for delivery in 2023, with options to build three further similar vessels.

The company has said it will not order any new bulk carriers going forward.

The Baltic Exchange's main sea freight index gained on Tuesday, snapping a four-session run of losses, helped by stronger rates in the capesize and pa