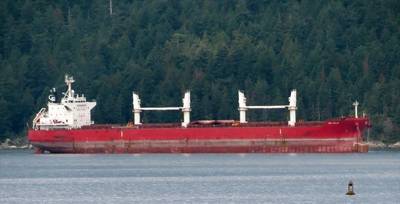 Scorpio Bulkers announced it has sold another bulk carrier, marking its seventh ship sale since revealing plans to pivot away from dry bulk shipping toward offshore wind services.

The Monoco-based shipowner said on Thursday it reached a deal with an unnamed, unaffiliated third party to sell the 2016-built Ultramax SBI Zeus for approximately $18.5 million.

Since September 28, Scorpio Bulkers has also sold SBI Hera, SBI Phoenix, SBI Samson, SBI Conga, SBI Sousta and SBI Rock. Upon delivery of the four Ultramax and three Kamsarmax bulkers to their respective owners in the fourth quarter of 2020, Scorpio Bulkers will have an operating fleet of 47 vessels consisting of 42 wholly-owned or finance leased drybulk vessels (including 13 Kamsarmax vessels and 29 Ultramax vessels), and five time chartered-in Kamsarmax vessels.

Eyeing an exit from dry bulk and new opportunities in the offshore wind sector, Scorpio Bulkers announced in August that it had signed a letter of intent to enter into a shipbuilding contract with South Korea's Daewoo Shipbuilding and Marine Engineering (DSME) to build a wind turbine installation vessel for delivery in 2023, with options to build three further similar vessels.

The company has said it will not order any new bulk carriers going forward.