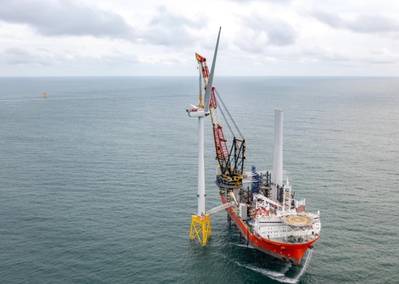 The first offshore wind turbine has been installed at Seagreen, an SSE-TotalEnergies project which will become Scotland’s largest and the world’s deepest fixed bottom offshore wind farm once complete.

The installation of the first Vestas V164-10.0 MW turbine in the North Sea off the Scottish coast heralds the start of the turbine installation phase which will see a total of 114 wind turbines installed across the project site.

This turbine is also the first V164-10.0 MW turbine installed globally, and at 10MW will be the most powerful turbine currently installed offshore in Europe once operational in terms of power rating.

Once completed, the 1.1GW Seagreen offshore wind farm will be capable of generating around 5,000 GWh of renewable energy annually, enough electricity to power more than 1.6 million UK homes and save around 1.6 million tonnes of carbon dioxide emissions annually.

Components for the first turbine to be installed, including blades, nacelles, and the supporting towers, were transported to the site by installation contractor Cadeler’s giant windfarm installation vessel Wind Osprey from Vestas’ turbine marshaling base at Able Seaton Port in Hartlepool, North-East England.

The offshore wind turbine was installed onto a 2,000-tonne three-legged caisson jacket foundation fixed to the bottom of the North Sea floor.

Situated around 27km off the Angus coast, the £3bn wind farm is a joint venture between SSE Renewables (49%) and TotalEnergies (51%).

SSE Renewables is leading the development and construction of the Seagreen project, supported by TotalEnergies, and will operate Seagreen on completion for its expected 25-year lifetime.