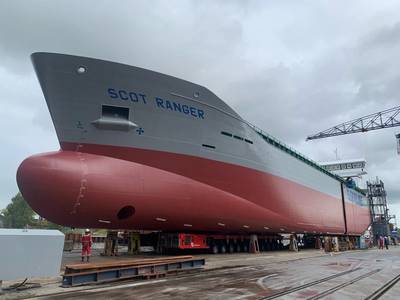 Dutch shipbuilder Royal Bodewes announced that U.K.-based shipping company Scotline Marine Holdings Ltd has exercised its option for a fourth newbuild 4,800 DWAT Bodewes Trader, to be named Scot Isles and launched in the third quarter of 2021.

A 90-meter sister ship Scot Ranger is currently being built at Royal Bodewes' yard in Hoogezand.

The British-flagged box-shaped singledeckers are classed by Lloyd's Register and are ice class 1FB FS (Finnish and Swedish), mainly used for transporting timber from the Baltics. The vessels are powered by MAK engines and each have a beam of 15.20 meter and a maximum sailing draft of 5.68 meters.