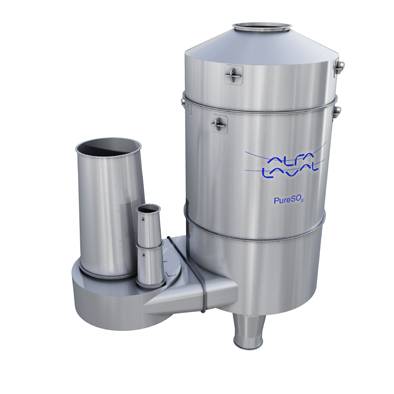 The order intake for the Alfa Laval PureSOx scrubber system continues to intensify as January 2015 approaches. Four PureSOx systems have now been ordered by Finnlines, a leading provider of RoRo and Ropax services, whose Baltic Sea and North Sea operations will soon fall within an Emission Control Area (ECA).

RoRo and Ropax vessels from Finnlines offer services from Finland to Germany, North Sea Ports, Spain and via the Åland Islands to Sweden, as well as from Germany to Russia. Following a recent order, four of the company’s existing RoRo vessels will now be equipped with PureSOx scrubber systems from Alfa Laval.

“With Alfa Laval PureSOx, Finnlines will be able to continue using HFO in an area of operation where ECA limits apply as of January 2015,” says René Diks, Manager Marketing & Sales, Exhaust Gas Cleaning at Alfa Laval. “In just a few months, having a scrubber like PureSOx on board will give these vessels an immediate fuel cost advantage over competitors who switch to distillates.”

“Finnlines’ objective is to guarantee long-term profitability through high-quality operations, and the installation of scrubber systems on our modern RoRo vessels is a major step in the implementation of our strategy,” said Emanuele Grimaldi, President and CEO of Finnlines. “Installing PureSOx from Alfa Laval will allow us to comply with ECA limits while ensuring continued fuel economy. The extensive experience that Alfa Laval has in this area, together with the retrofit services the company can provide, will help us greatly during the engineering and installation phases of this programme.”

One scrubber for multiple engines
Alfa Laval will fulfil the Finnlines order in late 2014. Retrofits of the RINA-classified Finnhawk, Finnkraft, Finnmill and Finnpulp will be conducted at yards in Northern Europe, with installation and commissioning taking place from December 2014 to January 2015.

Although the vessels all have four-stroke engines from MAN, their PureSOx configurations will differ somewhat. On the Finnhawk and Finnkraft, which have single engines of 12.6 MW, single-inlet scrubbers will be used. The Finnmill and Finnpulp, which each have two engines of 9.45 MW, will instead have multiple-inlet scrubbers. “Having multiple inlets will allow us to reduce the space and equipment requirements aboard the Finnmill and Finnpulp by using one scrubber to handle both engines,” Diks says.

Prepared for the Baltic and the future
The Alfa Laval PureSOx systems for all four Finnlines vessels are designed for open-loop operation with seawater, which means they are sized for the low alkalinity of the Baltic Sea. “The further north you sail, the less alkaline the Baltic Sea becomes,” explains Diks. “This has to be taken into account when installing an open-loop system for these waters, because the alkalinity of the seawater has a direct impact on the scrubber’s cleaning capacity.”

In addition, Finnlines has chosen a versatile scrubber design that leaves the possibility for a later conversion into hybrid systems. “The PureSOx systems aboard our vessels will provide compliance and fuel economy in 2015, but also the flexibility to add closed-loop operation down the road,” Grimaldi said. “This will enable us to meet the future with confidence.”