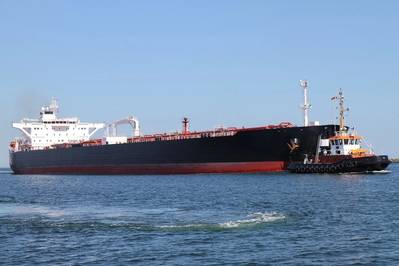 Seaborne oil has thrown a lifeline to refiners in eastern Germany and Poland, with non-Russian deliveries into the Polish port of Gdansk hitting at least seven-year highs this month as they switch away from Russian supply.

Imports booked for May into Gdansk from Egypt, the United States, Norway, Britain and West Africa had hit 8.4 million barrels by May 16, their highest level according to Refinitiv Eikon ship tracking data that goes back to 2015.

At the same time, Russian crude booked for May into Gdansk and the port of Rostock stood at 700,000 barrels, down from a high of 12.9 million in May 2019, the data showed.

The steep rise in such supply comes as Europe works toward an outright ban on Russian oil.

Imports into Gdansk from Norway in April and from the United States and via Egypt in May all hit highs, the Refinitiv data showed.

Norwegian imports in April hit 2.2 million barrels, similar to U.S. volumes booked for May while those booked via Egypt this month have hit 5.7 million so far, the data showed.

"Crude imports from countries other than Russia are now at the highest in history."

This deal might buffer some of the higher freight costs for oil shipped from the Middle East, Ul-Haq added.

Anders Opedal, chief executive of Norwegian energy firm Equinor, told Reuters that all crude from Norway's Johan Sverdrup oilfield, the largest in Western Europe, is now going to Europe, while a year ago about 60% of it went to Asia.

Imports from the British North Sea have not increased markedly since war began in Ukraine in February but they have become more regular since late 2021.

Larger piped supply
Germany's government has hailed imports into the two Baltic Sea ports of Gdansk and Rostock as promising alternatives to Russian oil though the volumes still stand at a fraction of the capacity of Russia's Druzhba Pipeline, which in February delivered about 22.4 million barrels.

Rostock has yet to come into play, however, with the only crude oil discharged there since June 2019 delivered last month from Russia. Since early 2015, there have only been nine crude cargoes in Rostock, four of which from Russia.

"Exports towards Rostock since March remain at zero with the region struggling to diversify from Russian barrels," Vortexa's Papadimitriou said.