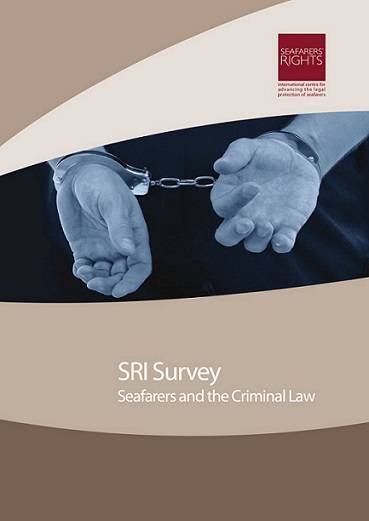 Seafarers’ suggestions on how to improve their situation when facing criminal charges were presented at the landmark 100th session of the Legal Committee of the International Maritime Organization (IMO) which met in London from April 15-19, 2013.

The suggestions, which emanated from a comprehensive eight language survey conducted by Seafarers’ Rights International (SRI) over a 12-month period to February 2012, focus as much on fears of their own human rights being violated as on a lack of due process in the criminal process. A total of 3,480 completed questionnaires were submitted by seafarers from 68 different nationalities.

According to the seafarers themselves, there is a frequent lack of due process for seafarers who face criminal charges. Seafarers are complaining of unfair treatment, intimidation and a lack of legal representation and interpretation services. Almost half of the seafarers in the survey said that they would be reluctant to cooperate fully and openly with casualty inquiries and accident investigators because of concerns they could be implicated in a crime; because they do not trust the authorities and because they are concerned that cooperation would have a prejudicial effect upon their employment.

The findings in the survey suggest that the rights of seafarers, as enshrined in the Guidelines on Fair Treatment of Seafarers in the event of a Maritime Accident, adopted by the IMO and the International Labor Organization (ILO) are often be subject to violation: itself causing widespread concern among seafarers.

“The message from seafarers is loud and clear,” said Deirdre Fitzpatrick, Executive Director of SRI. “Seafarers are saying that their rights are theoretical and illusory; they need them to be practical and effective.

“Since criminal laws are largely tailored to nationals, they are an uneasy fit for foreign and temporary transnational workers. It is clear that seafarers are more exposed to criminal proceedings than many other workers and therefore need special assistance,” she added.

“The seafarers’ suggestions for what is needed to improve their situation, or their perception of their situation, offer a challenge to the maritime industry and to prosecuting authorities generally, if seafaring is to remain a viable option for young people.

“The SRI survey has brought the seafarers’ concerns to the fore and it is hoped it will create momentum amongst stakeholders - seafarers’ organizations, employers, regulators and non-governmental bodies, in addition to seafarers themselves - to better address the unfair treatment of seafarers.  It seems that much remains to be done to protect this body of essential workers from unfairness and injustice but the effort is essential not only for the protection of serving seafarers, but also to improve the image of the profession for new recruits to come,” Ms. Fitzpatrick concluded.

The Committee agreed that the issue of fair treatment of seafarers in the event of a maritime accident should remain on its agenda and be discussed again in 2014.

A full copy of the SRI Survey is available at here, and alternatively a hard copy can be requested from Debra Massey by contacting her using the details below.