Guy Harvey to be Honored by Seafarer's House 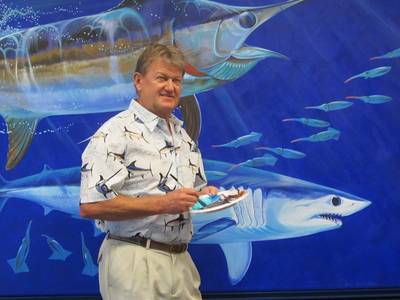 Guy Harvey – artist, conservationist and entrepreneur – has been selected as this year’s recipient of the Seafarers’ House International Golden Compass Award.

The award is given each year to those who have achieved distinction in the maritime world, those whose vocation or avocation has been the sea, or those who have ministered to or otherwise assisted seafarers.

Dr. Harvey has been a champion of the seas since an early age. A student of marine biology, he has spent his life exploring the undersea world and bringing it to life on land through his art, which can be seen in galleries, onboard ships, on life-size murals and on eponymous merchandise. The Guy Harvey Ocean Foundation is well-known for its research in the marine biology field and the message of stewardship and conservation of our oceans.
“I am honored to be receiving this award from Seafarers’ House. The organization has done so much to make a difference in the lives of nearly 150,000 mariners each year,” said Dr. Harvey. “These seafaring men and women play an important role in our society and the Seafarers’ House offers so many services of value to the working mariner.  I am pleased to be a part of recognizing their work as well.”
A self-taught artist, Dr. Harvey’s works have received recognition worldwide. Some of his larger-than-life public murals can be seen on college campuses, at airports and most recently along the hull of the entire Norwegian Cruise Line ship, Escape. His successes have allowed him to engage in many philanthropic, conservation and educational research efforts. “We are thrilled to be celebrating the work and accomplishments of this noted marine wildlife artist and conservationist,” said Seafarers’ House Executive Director Lesley Warrick. “Guy Harvey has dedicated his life to the sea and his many philanthropic efforts have thrown into high relief the need to protect the world’s oceans. His message of stewardship and care for our oceans rings true with all of us who draw our living from the sea and care for the future of the maritime community.”
Past award recipients include international seafaring hero Captain Richard Phillips; Joseph Farrell, Resolve Marine Group; Roberto Giorgi, V.Ships; Dan Sten Olsson, Stena Sphere; Adam Goldstein, Royal Caribbean International; Stein Kruse, Holland America Line; Captain Nicola Arena, MSC Cruises; and Thomas B. Crowley, Jr., Crowley Maritime Corp., among others.
This year’s annual Golden Compass Gala is being held May 21, 2016 at the Hyatt Regency Pier Sixty-Six in Fort Lauderdale.  For additional information Email events@seafarershouse.org or call 954-734-1580.