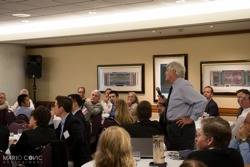 The Seasteading Institute, a nonprofit dedicated to enabling the establishment of permanent communities on the ocean, recently held its third conference, at San Francisco’s Le Méridien Hotel. Since 2008,

The Seasteading Institute has been the focal point of the seasteading movement, which aims to utilize the high seas to spur innovation within the government industry. Seasteading enthusiasts believe humanity would benefit from a new place to experiment with new societies, but since all of terra firma is claimed, they look to the ocean as the next frontier.

“The ocean provides a space to innovate with political and social systems that could advance and serve humanity,” says The Seasteading Institute director Randolph Hencken.

The conference, attracted over one hundred individuals from at least seven countries, representing an array of backgrounds and perspectives, and making for a lively and energetic affair throughout.

The focus of the conference was not politics or ideology. Rather, it was on what Maritime Alliance representative William Riedy referred to as the “blue-tech revolution”—the technologies, discoveries, and partnerships that could soon unlock the oceans’ vast potential.

Importantly for the maritime industry, seasteads and blue-tech companies are competing to provide sustainable sources of seafood, energy and freshwater to earth’s 7 billion people. They represent emerging markets both for existing marine services as well as new maritime technologies.

The blue-tech revolution, led by groups like The Seasteading Institute, must be preceded by solutions to the challenges presented by permanent ocean habitation, such as economically and sustainably harvesting food, energy, and freshwater, as well as providing safety and real-time communications.