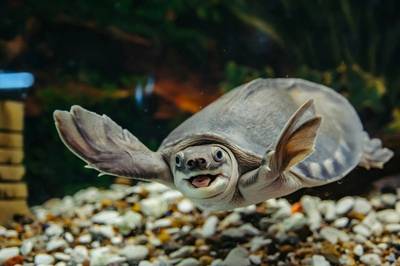 Malaysian authorities seized about 3,300 rare pig-nosed turtles on Wednesday suspected of being smuggled into the Southeast Asian country.

The turtles, found in Australia and on the Indonesian island of Papua, are endangered due to high demand from exotic pet traders, wildlife experts said.

Seven packages of turtles were discovered during a boat inspection near Johor on Malaysia's southern coast, the Malaysian Maritime Enforcement Agency (MMEA) said in a statement, adding that two people were arrested.

The value of the seized turtles was estimated at $36,909, the agency said. "We believe they were brought into the country to be sold as exotic pets," an MMEA spokesman said. Apart from being sold as live pets, conservationists say the pig-nosed turtle is often hunted for meat consumption and for use in traditional medicines in some Asian countries.

Malaysia is considered a major transit point for the illegal trafficking of endangered species to other parts of Asia.