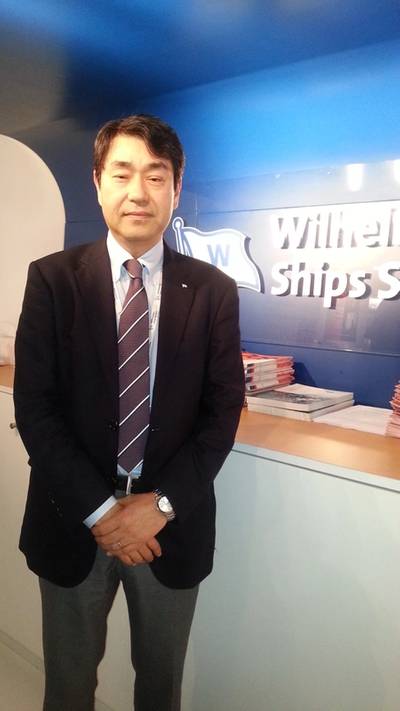 Speaking after last week’s Bariship Japan event in Imabari, General Manager WSS Japan Yoshihiro Iizuka said that for ship-owners and vessel operators, a combination of increased regulation and continued pressure on budgets means that the cost of products and services is more crucial than ever. However, according to Iizuka, the company has seen steady demand for its services such as Life Raft Exchange program and Ships Agency Re-Defined.

He said, “The Japanese shipping market remains difficult and this is expected to continue for the next year, despite the successful measures taken by the government to stimulate growth. With increasing competition on labor from China and Korea, Japan is at risk of losing business, with the smaller shipyards and owners suffering the most.” “On the other hand, most of the major players in the market have reported the fiscal year 2012 result which shows a recovery of business. This is mainly due to the fact that they are benefiting from the recent weakness of the Yen.”

Iizuka continued, “With the cost of goods now a major concern, we are working with our customers to provide products and services that can increase their efficiency and save costs. For example, within our ships agency business, the number of calls handled by our local team over the period 2011-2012 grew by 10 percent and continues to grow, month on month. We believe that much of this growth is due to strong uptake of the SARD service. Japanese vessel operators and owners are very positive about SARD because it guarantees efficient operations and fast turnaround, both of which are extremely important. In some cases, feedback tells us that we have been able to save customers up to three hours per port call.”

In addition, the Japanese team has seen an uptake of the LRE program, with the number of liferafts exchanged and serviced across north-east Asia doubling in the past two years. With this in mind, Iizuka is confident that despite a fragile economic outlook, the company can continue to expand its operations across the region. He said, “The big question is how factors such as currency development linked with economic growth and tax reduction will affect seaborne traffic. Add trade barriers and lower regulatory hurdles to that picture and we have a quite complex market landscape. However, with the efforts made in Japan, we will succeed in pushing up the long-term growth rate, leading to a recovery of the Japanese marine market. Whatever happens over the next 12 months, the movement of physical goods out of and into Japan will increase slowly, but steadily.”

WSS said it is continuing to invest heavily on resource and expertise in Japan and across North Asia to meet the increasing demands of this growing maritime hub. Currently, it covers 180 ports in Japan with three main service centers located in, Yokohama, Kobe and Moji in addition to the office in Tokyo focusing on ships agency business.