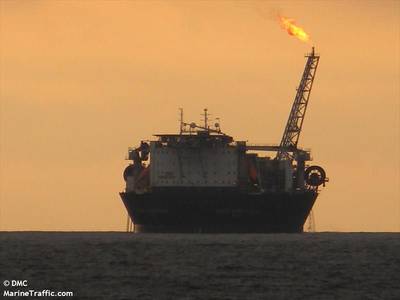 Teekay's Sevan Hummingbird FPSO is set to leave Spirit Energy's Chestnut oil field in the North Sea after 13 years of oil production at the site.

According to notice to mariners issued by Teekay on Thursday, the FPSO is currently being disconnected from its moorings.

The 2007-built vessel, which was also known as Hummingbird Spirit, or just Hummingbird, has the capacity to produce around 25,000 barrels of oil per day, and a storage capacity of 270,000. It is operated by Altera on behalf of Teekay.

The cylindrical FPSO, with hull diameter of 60 meters, has been producing oil from the Chestnut field since 2008.

Spirit Energy, the operator of the offshore oil field, in August 2021 said it would file a decommissioning program for the Chestnut field. Read More.

Interestingly, when the Chestnut first came on stream in 2008, it had an expected two-year production life. However, back in 2021, when Spirit said it would file the decom plan, the field was still producing oil via three wells, the last of which was drilled in 2020.

The field, nearly 200km east of Aberdeen, had produced more than 27 million barrels of oil by the end of August 2021, having initially been expected to yield around 7 million barrels.

Now, the time has come for the vessel to leave. In the notice to mariners, Teekay said that the vessel would be disconnected from the moorings., and that the FPSO would be under tow from Friday 24/06/22 to Wednesday 28/06/22 from its field position to Port of Nigg, Cromarty Firth.

The mooring lines will be recovered from the field location starting Friday 24/06/22 for up to 14 days. The 12 Suction anchors and a portion of ground chain will remain at the location and will be recovered later in 2022, Teekay said.

Offshore Engineer reached out to Teekay, seeking info on what the plan was for the FPSO, once it reaches Port of Nigg. Teekay did not reply.

Under the proposed decommissioning plans announced last year, the FPSO was to be removed and Teekay was to assess potential reuse options or ultimately decide to recycle the vessel.