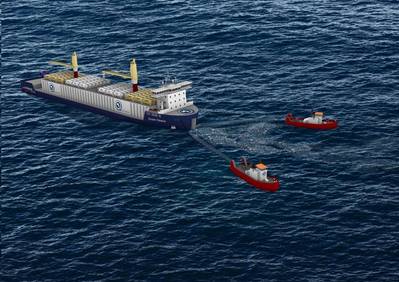 An innovative ship is being designed to collect plastic waste from the world’s oceans and then convert it into clean hydrogen, allowing surplus hydrogen to be shipped back to shore.

At least 14 million tons of plastic end up in the ocean every year, according to the International Union for Conservation of Nature (IUCN). This type of debris—which is currently the most abundant type of litter in the ocean, making up 80% of all marine debris found from surface waters to deep-sea sediments—could more than double in oceans and other bodies of water by 2030, an assessment by the UN Environment Program (UNEP) found.

Developed to help tackle this growing environmental problem, the new concept ship is the brainchild of New York-based hydrogen generation and energy storage solutions company H2-Industries and German naval architecture company TECHNOLOG Services. The vessel will be at least 150 meters in length, though its exact size remains to be determined at the design stage, depending on optimal storage capacity.

The plan is for the ship to travel at four knots with the waste plastic collected by two smaller vessels towing a two-mile net that funnels the waste from the surface and up to ten meters below it. An open bow design will allow the collected plastic waste to be fed onto conveyors and into the storage hold.

This waste will be converted into hydrogen by the same thermolysis process that the H2-Industries’ plants will be using on shore. For every 600 kg of waste collected, approximately 100 kg of hydrogen can be produced and, then, stored in liquid organic hydrogen carrier (LOHC), which is a special liquid that can carry hydrogen, in 20-foot containers. These containers will be transferred to smaller vessels by onboard cranes for delivery to shore. Because of the benefit of removing harmful plastic waste from the ocean, hydrogen produced in this manner can be classified as “beyond green,” or “greener than green” as it has been dubbed, recently.

LOHC carrier fluids bind hydrogen chemically and, within H2-Industries’ process, the stored hydrogen is neither volatile nor capable of self-discharging. The LOHC can be hydrogen-charged and discharged only in combination with a certain catalyst, infusing and releasing hydrogen, as often as needed making it remarkably cost-effective. H2-Industries storage solutions work by charging (hydrogenation) and discharging (dehydrogenation) the LOHC. The charging and discharging are independent processes using proprietary catalyst technology.

The ship will be designed to run on electric motors using the LOHC produced on board as its fuel and creating electricity using H2-Industries’ 19 inch eRelease racks. Each rack will hold 48 KW of installed power and there will be multiple racks to deliver the approximately two MW that a ship of this size will require. This is the same technology H2-Industries has developed and which it intends to deploy in cruise liners, super-tankers, and large container ships. H2-Industries has received preliminary approval to build its first LOHC hub in East Port Said in Egypt and is currently in discussions with more than 20 countries and, as well,  with several ports worldwide.

Michael Stusch, CEO of H2-Industries, said, “It is becoming increasingly clear that the shipping industry can make a positive impact on reducing global emissions. At H2-Industries, the plan is to help decarbonize industry and power generation, while cleaning up our water resources and converting pollutants into an energy source. To achieve this, we are looking for investors. Once the investment is in place, we expect each ship will be built within roughly 24 months.”

According to the project partners, one constraining factor for production is the volume of plastic feedstock. One rotary kiln can handle 600 kgs of waste every hour and that will generate approximately 100 kgs of hydrogen. Each ship will be designed to be fitted with multiple kilns to match the speed of plastic collection. It is envisaged that each ship will collect plastic for around a year in one location before moving on to another water waste site. To ensure no marine wildlife is endangered during the waste collection process, the vessel will employ industry tested technology developed for the seawater intake for desalination plants designed to protect wildlife and habitats.