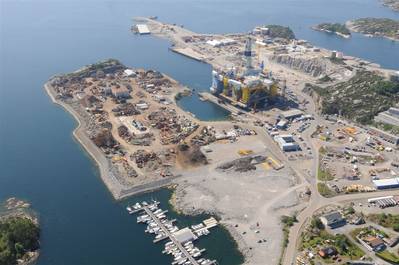 Bergen Group ASA announced it has signed an agreement with Calexco S.a.r.l. regarding sale of the remaining 30 % shares in NorYards AS for a price of $4 million. The completion of the transaction is expected to take place by end of August 2014, thus facilitating the group’s departure from its shipbuilding interests.

The sale of the minority ownership in NorYards AS (former Bergen Group's Shipbuilding Division) will generate an accounting loss to be incorporated in the Bergen Group’s figures for Q2 2014, the company said.

CEO Asle Solheim in Bergen Group is satisfied with the sale of the remaining shared in NorYards AS: “Bergen Group has in recent quarters implemented several measures to reduce its involvement in shipbuilding. Now we choose to sell the remaining shares in NorYards AS earlier than originally planned. In addition, this week we will finalize the delivery of the advanced offshore vessel "North Sea Atlantic" which is the very last newbuilding project under direction of Bergen Group. Thus, we now can concentrate completely and fully on the Group's future growth areas within offshore and maritime related service activities.”

CEO Johannes D. Neteland in NorYards AS is pleased with the agreement entailing Calexco to be the sole owner of NorYards AS: “We now have an international owner dedicated to further develop NorYards position in the international market for construction of advanced offshore vessels and specialized vessels.”

NorYards AS signed in April 2014 their first newbuilding contract, valued more than NOK 650 million. The contract was awarded from NFDS 2 Offshore AS for outfitting and commissioning of a new and modern anchor handling tug supply vessels (AHTS). The project will be carried out at NorYards Fosen, generating outfitting activity at the yard from Q3 this year until delivery in Q2 2015.